Some help and guidance on creating a placeable in gmax 1.2

I was hoping I could get some help with a placeable that I want to create in gmax 1.2.
My idea is to take a sarcophagus in NWN1, which is a container and make a door or transition
area out of it. I don’t mind learning about other parts of gmax 1.2 to make my dream work. I would
like to make the lid to be moved to one side are be pushed off altogether. Then a transition area
trigger be added to go to a lower level of a dungeon. Any help and guidance is extremely
welcomed. Thanks in advance for your insight and help.

It has been a long while since I used Gmax, so if your not that used to Gmax yet, then i would make the switch to Blender its 100% free and fully supported. Plus your going to be able to do more in the long run with it then Gmax.

Plus I have created some How to videos and put together a web page with links to videos to help new people learn how to use it for NWN.

Blender can be downloaded here for free: https://www.blender.org/

The web page with lots of videos to help you get stated can be found here: https://topnwn.guildlaunch.com/custom.php?gid=127957&page_id=115351

I didnt know what Gmax or Blender was a few years ago and never used them before in my life before that. Now I’m creating the models that I posted screenshots of below and you can too if you really want to. That said if you would like to work with a group of 3D models and help out on a large project let me know we are always looking for more people to join our team.
Take care and if you need anything else just let me know. 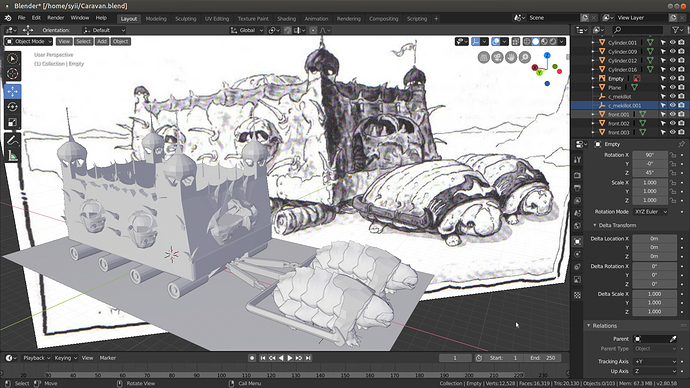 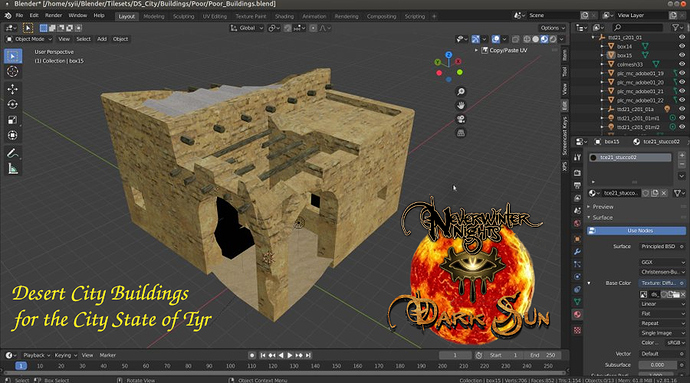 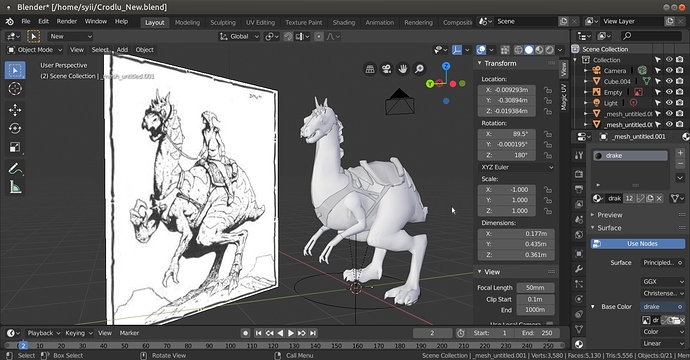 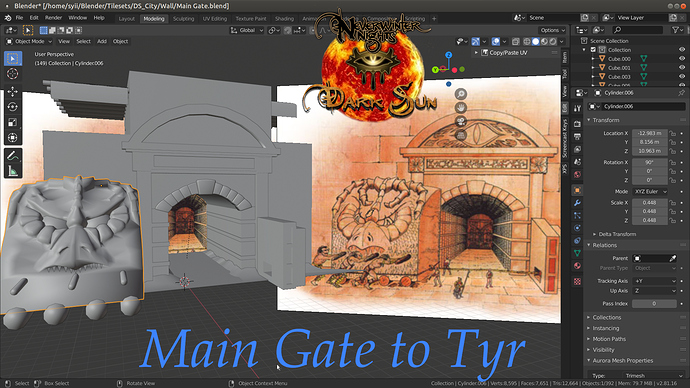 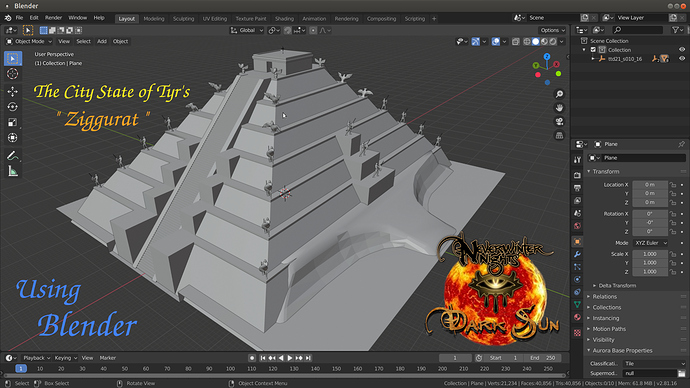 Thanks for the insight on Blender. I will take a look at it.

As an interim measure, you could simply put a script on the placeable (spawned open) that jumps the PC to a waypoint OnClick (or launches a conversation with enter / don’t enter options).

I thought of that myself, back in 2000, but I want to have the visual effect. I am perfections at best.I love to impress my audience.

I would like to say first, that I tried blender 2.8 and the neverblender script that matched it, but I was unable to get it to work for me under Windows Vista 32 bit. I Then upgraded to Windows 8.1. Then, I tried installing blender 2.6, 2.78, 2.79 and 2.79b with the neverblender scripts that match it and got error messages for that also. It wouldn’t let me place a x in the box under enable after file addon file. I followed the directions for enabling the addon feature, that stated just keep the blender scripts compressed in its .zip form. I forgot to mention this earlier. The only error message for blender 2.8 was a graphics card upgrade error. Nvidia driver didn’t make a openGL 3.3 support driver for Geforce series 7 graphics card. I would have to fork out more money for a better graphics card just for blender 2.8.

I am able to get Gmax to work for my needs and I learned by playing around with the functions to get the Gmax to work.

I found this hak pack, by a link pointing to it from my searching on Neverwinter Vault. This hak pack is called TB Sarcophagus. This hak pack was created by John Hawkins. I tried to reach out to him by email, but was unable to get him. The road runner account was deleted, so my email came back quickly. Anyway, the hak pack features a sarcophagus standing up right and the front lid opens up on it. There is a script you can use that comes with this placeable and the message on the script pauses. Then tells you have discovered a secret passage way. Then moves you to a waypoint. After clicking on it. The Onuse fires off.

In Gmax I was able to import the .mdl file. Then I was able to un-link the placeable form the Aurora Base and lay the sarcophagus flat down. Using the rotate function in Gmax and the move function in Gmax. Then I re-link everything backup to the Aurora Base in Gmax. Then I was able to export it out. I was able to use the same file name with the matching .2da files listing in the hak pack. I downloaded the Hak Editor from the Vault to help me see the placeable .2da file. In short all I did was use toolset to un dock the hak pack form the module and save it. Then in the Hak Editor I removed the .mdl file. Then placed the changed .mdl file back to the Hak pack. Using the Hak Editor. Then I went back into toolset. Then I placed the hak pack back on the module. Then I saved it again. Then I closed toolset. Then I load toolset back up again and went under custom, under special and made the sarcophagus. Then I saw it was lying flat, so I placed it on the floor of the module. 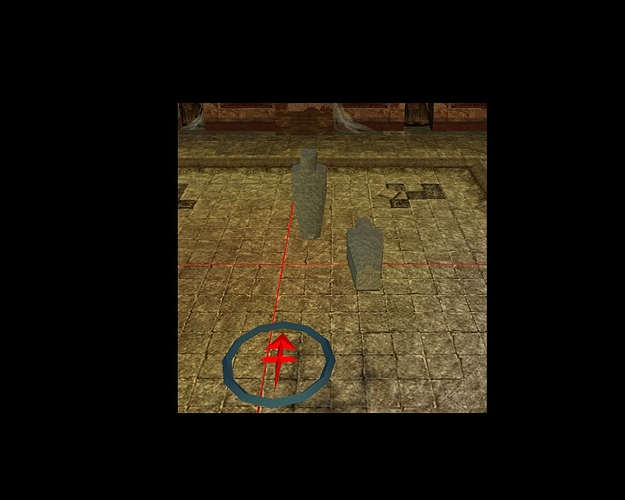 Custom Placeable Toolset1280×1024 98.3 KB
Here is a picture of John Hawkins sarcophagus standing up and this one was the one I made laying down. I was able to complete one dream I had since 2006, instead of earlier stating 2000.

I would like to encourage anyone that has a dream of modeling and playing around with Custom Content 3.0, to try it out for a real self-esteem booster. I used Gmax 1.2 and NWmax .08 scripts. Now I just need to master the .2da files and make a custom placeable then add my own line entry in the .2da placeable file. Then load that onto a hak pack. Then make a module and see how that works. I would like to Thank all of those that helped me and Neverwinter Vault for housing the tools and knowledge. For making custom content.

When I read the title of the thread I thought you needed some help and guidance on creating placables in gmax. I’m glad you figured it out. If you do need some help at a later point though, check out the vault discord. You’ll get help there.

Thanks for the comment on the Vault discord. I was wondering if anybody can help me remember a tool on the vault. I remember a Custom Content best friend. It unpacks the game out and places it in the folders that the game is based on. All the sound files go to Ambient and the .mdl go to the mdl folder. If memory services correctly. I just forgot the name of the tool that did the unpacking of the game files. Also too, I was wondering if they have a campaign editor now? Thanks for the heads up and advice.