Some questions about creature blueprints

Question #1:
Do I need to add size modifiers to skill values when creating blueprints for creatures with non-standard sizes (tiny, small, etc) in Toolset? Or the game counts them automatically?

upd: seems like it’s automatic.
I know my question looks a bit stupid

Question #2:
Does changing a number of uses per day for a special ability actually work and affect anything? When I set it, save the blueprint and restart Toolset, it resets to 1 use per day.

if the blueprint gets saved again the reset to 1 gets saved. But if you don’t save it, the values should still be at what they were set to before reopening the blueprint in the toolset: ie, the “1” that’s shown seems to be a toolset glitch (exclusively, unless/until re-saved)

recently i’ve been modifying a blueprint that’s in my /Override and it doesn’t display the quirk :\

i think that the Spells tab is affected as well as the SpecialAbilities tab.

ps. If in doubt, the values can be checked (independently of the toolset) with TlkEdit2 (although yes its tedious)

and as to whether the #uses matters … idk, it does at least for the Spells I’ve been testing on that blueprint in my /Override … an NPC wizard w/ 2 stoneskins, 3 scorching rays, etc. But those aren’t SpecialAbilities

perhaps set up a mock battle in a small area and watch how the AI deals with whatever it’s given,

pps. I don’t know exactly what forces a save of a blueprint. For example, blueprints in a module might not be re-saved, simply if the module is saved, unless the blueprint is open perhaps.

Hmm, each use is represented by a separate cell in the SpecAbilityList field. It seems that Toolset simply doesn’t display them correctly after reopening. I haven’t tried to re-save a blueprint after that, but I guess it will be saved incorrectly because of the problem with displaying a number of uses (all cells will be merged into one). 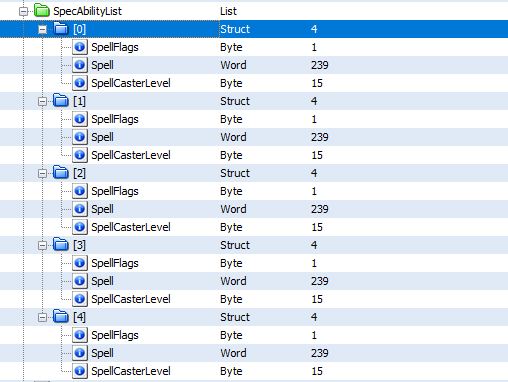 Blueprints are saved every time the module is saved, whether you open them or not. Only Ao knows why.

ok. So … i think the #uses will be okay as long as the blueprint † is never displayed in the toolset anymore - lol, i mean i gotta laugh what else can a guy do.

Question #3:
How does a script that fires a specific creature special ability know at which CL (caster level) it needs to be fired? I mean there’s a field in Toolset where you can set CL for that special ability, but how this information can be accessed inside the script? Does GetCasterLevel() function get this information somehow?

The good point about this is that #uses doesn’t actually reset after re-saving. I checked with TLKEdit. They aren’t shown, but still in place. Not so bad as it was expected.

level is in the spellscript/impactscript. generally speaking,

the field in the toolset is not used, i believe. It is used: when setting up a dragon (class: pure dragon) and giving it Special Abilities (specific spells) it would cast them at L0 if left at L0. But when set to L20, the function GetCasterLevel() returned a more appropriate value for the spellscripts.

I still don’t trust it though. For example, if an NPC actually has levels in a caster-class, the value in the toolset could be overruled … (ie. my recent test was with a non-caster class only – though it could depend on the toolset-tab: Spells vs. Special Abilities)

I don’t want to create a new thread, so I ask here.

Damage Reduction x/magic is bugged in NWN2 (cannot be bypassed at all), right? Does It relate both to effects and item properties?

I did some tests. it works normally in 1.23 (both IP and the effect). Seems like this bug was fixed…

note: ItemPropertyDamageReduction() doesn’t work at all though. If you want an item with DR it has to be done in the toolset to a blueprint’s properties.

/or so, a few of us figured out on one of the old forums …

did you test that, Aqvi? ie, try to script IP Damage Reduction onto an item - and even if it appears on the instance, does it work

I’ve tested DR/magic granted by EffectDamageReduction() and a blueprint’s property.
Yep, I’ve heard, ItemropertyDamageReduction() doesn’t work at all, but it’s not a big problem for me.
Anyway, I’ll look at it and inform you about the result of my test.

I’m a little confused about the Darkvsion feat. How can the same feat (Id 228) have different ranges for different races? (ex: Drow - 120 feet, Aasimar - 60 feet). Is it harcoded? Or the game description is wrong? Or am I missing something and this can be customized somewhere?

Those ranges probably match what is written in the D&D pnp monster manuals.

Yep, that’s true. I wonder whether one can choose which range (60 or 120) to use for some custom race.

i think Darkvision #228 is hardcoded: there’s no entry under its SPELLID column

it likely has a default range if the hardcode can’t lookup the race in an internal table - you could investigate, for said value, in races/subraces/appearance 2da’s … but i don’t believe its there.

Yes, darkvision is hardcoded - http://nwn.wikia.com/wiki/Darkvision. Looking in the Lexicon under racial descriptions, it notes that the darkvision is 60’. Thus, I would conclude that the feat is 60’ range as well and that the descriptions which have the range given as 120’ were just copied verbatim from the source material.