Since many of us are likely to be spending a little more time at home over the next couple of months (!) I thought I’d choose something to concentrate on in the toolset/game to help me while the time away.

As some of you will know, I’ve also been involved with a games design class of 14/15 yr olds introducing them to the game which has been huge fun. However, they are now at the stage of building their final modules so things will be slackening off soon.

One of the kids is a keen Witcher fan ( as indeed I have become after playing Witcher 2 and now Witcher 1 - great to see how they supercharged the toolset but you can still see a lot of it in their game). He asked me if it was possible to play as The Witcher and what was available on the Vault to help in this. I think he plans to take his toolset building on after we have finished and might try some thing Witcher based.

Since then, I’ve been amazed by how much there is - Geralt, rural tilesets, portraits, placeables ( brilliant, thank you, Zwerkules and also Black Rider !) and more. Easily enough to get started. However, as I know little enough about the game I thought I’d canvass some advice so I can offer him a package of stuff to help. Some questions if anyone can help.

Is this the best way to get the PC as a Witcher?
Will I need the same script in the OnEnter of every area in the game or is it a one off?
Pity he doesn’t have a Witcher-like animation for drawing /putting away his sword or even the scabbard to put it in. I take it there isn’t one?

Anyway, thanks for any help anyone can offer.

Hi Jimdad!
First great to hear, that the NWN-class is working so well! Congratulations!

As to the Witcher: I can write someting to 1.:
The only way I know to set the player to a different appearance ist to
SetCreatureAppearanceType( oPC, [Line no. in the apparance.2da]);
You can do it OnClientEnter, as you wrote or write up a script for a usable object, which will fire that command. You can equip stuff, but it won’t be shown, because thise skinmeshed models are not part based.
Animations: The original animations are importable and I recently was able to let the Geralt model to actually play the animations. But I wasn’t able to do an (NWN1-) export! The script is quitting at some point with no export result. And - not sure - is the drawing of a weapon hard coded? If yes, I think, you can’t replace the animation…

Hi, BlackRider. Love the stuff you have done with the Witcher. Just playing Witcher 1 at the moment and your areas are pretty accurate.

Thanks for the comment about the class. Yes, they are really enjoying it and producing much better stuff than before. I think especially the ones who just want to produce good stories or neat looking visuals. I’ll hopefully get the okay to post some of their efforts when finished. It’d be good to see other Computing departments take this up. It is games design at its most real in a lot of ways.

Yeah, I have the script working okay to change appearance. Equipping can be got over at the start through a chest or something.

The animations are really no big deal - it’s just a bit iconic the way he does it !

Maybe you could help me with another aspect of the Witcher stuff. I’ve downloaded your witcher rural area and placed some houses. I’ve then downloaded a lighted windows hak from Ancarion for your area but I cant get the windows lit. I’ve

Is there something else I need to do?

I imagine you also need to set the time to night - either by setting the area to Always Night or using SetTime and GetIsNight.

Yep! Proleric hit the mark: I just checked: I set the area to “exterior dark” and edited the setting to “always dark” and the windows were lit.
You could also set the game time to 5pm and speed it up a bit. At 6pm they the dusk-transition should fire (I have not tested, if that has been implemeted) and when it’s dark, the windows should shine.
Or, as Proleric wrote, do it via script (eg. fired by a lever OnUse):

As you can see below, I’ve set the area properties to always dark, (I’ve also set the environment to Exterior Dark), I’ve set the module start time to 22.00 hrs and the screenshot in game shows you what I’m seeing.

I’ve included the order of haks just in case something is wrong there. “Witcherlights” is the hak I made up of the lighted windows. “Witcher” is Zwerk’s Witcher placeables. 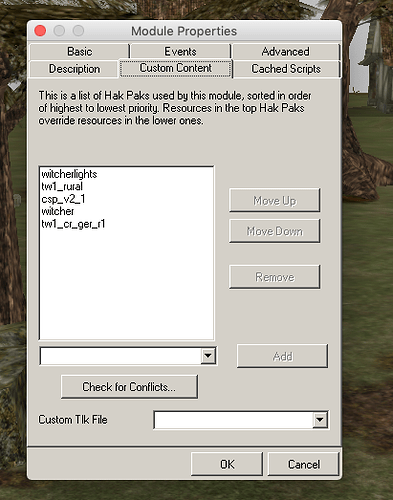 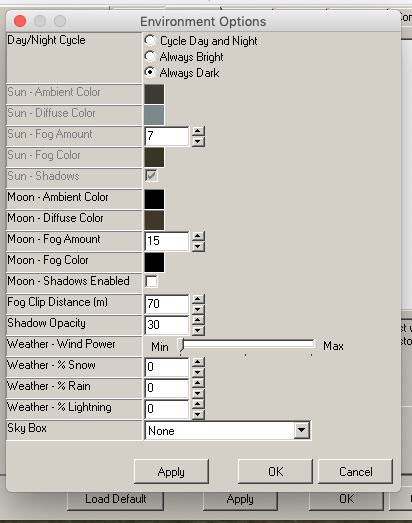 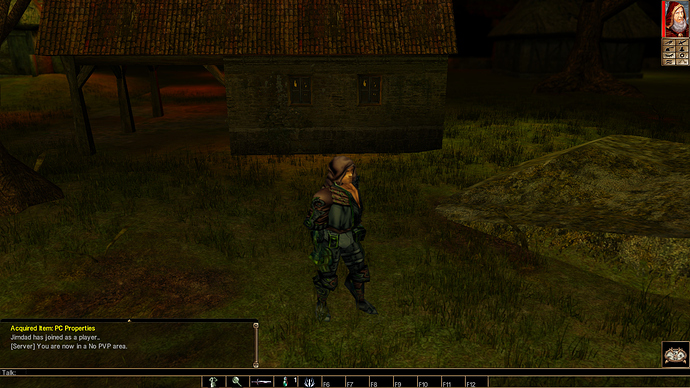 As you can see, it’s like I’m getting single candle flames !

Setup looks OK to me. Strange…
Well, I tested it with Classic NWN1. Don’t have access to EE atm. Anybody can copy that problem with EE?

May you could create a new module with the tileset and the lights-HAK on to and test it again… (just poking in the dark).