I downloaded a soundset from the vault. I managed to put the entries in my tlk and import the wav files into my override folder along with the soundset 2da. In game I hear the voices just fine.

I have three issues:

What can I do to align what the conversation sounds are with the text that shows up above their heads are suppose to say. And how do I fix the STRREF showing up in my creation of a PC at choosing the voiceset?

It would be so easy if there were tlk lines as references on the 2da where I could just put or change in my tlk…instead the numbers on the STRREF are not tlk lines…do I make sense? Ugh…lol

here is a pic of my 2da lines and the voices: 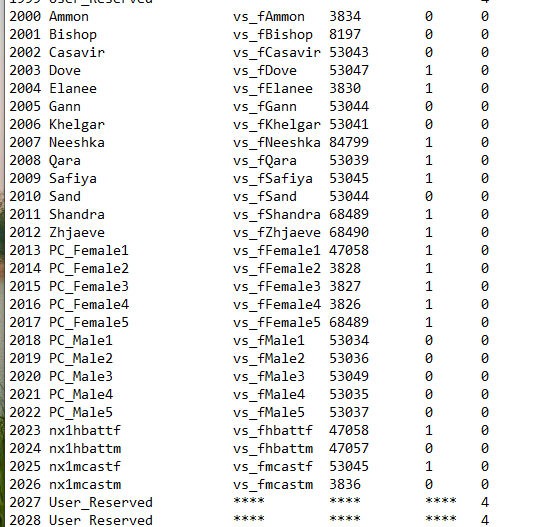 IIRC, in the SSF file for the soundset is a column titled “TextRef” or some such. I believe these lines have to match up with the TLK entries.

Thanks bud for answering me again…now I sound dumb…what are the IIRC/SSF files? I have neer worked with those…and where do I find them and how do I open them? Sigh…why couldn’t these things just be simple as just tlk line entries…

I found this editor…going to try it:

But the comments say it doesn’t work well

omg…so looking at this editor…I would have to do line by line fixes…why can’t the entire slew of the conversations for each person be done as a group…or am I just not understanding the use of this editor?

I open my tlk file using the editor from above. It points to a line (see pic) on my tlk file and plays the correct sound and line it says from my tlk entry (this from the editor), BUT, opening up my tlk file that is not the right sound nor right text…WTF??? 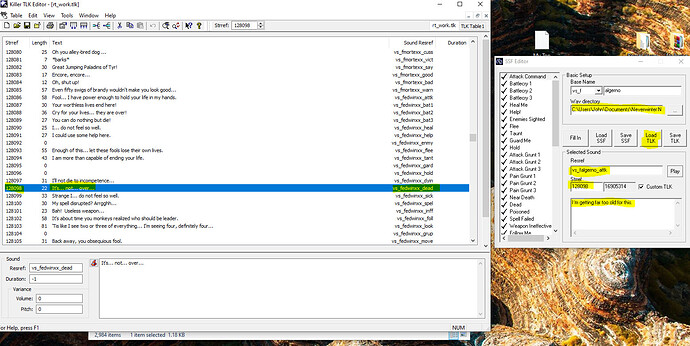 And what the HELL does a STRREF from the 2da have to do with all this??

Your guess is as good as mine. I’ve never really done anything with SSF files and linking in text.

Well thanks for at least pointing me in the right direction. I hope someone can help explain all this and if there is an easier way to do it …rather than line by line for each single comment for each voiceset.

Well after numerous attempts…just going to not put in the tlk entries…and not putting them on my 2da soundset. I still get the voices…so I will settle for that

Did you try moving your pre-existing stuff (located between lines 45000 and 45099) instead? At least, just to see if it’s all good initially.

Thanks for your comment. I honestly thought of that, but I would have to move basically all those lines. I worry I might screw things up if I didn’t paste them back exactly. Yeah…I know…lol…sounds stupid of me…but I didn’t because of that. I already deleted the entire sets of voices from my tlk file. I guess I can live with no text showing up to match their talking. I hate that doing voicesets can’t be done like simple tlk entires to match with the 2da. I really appreciate your comments and your willingness to help…thanks.

I worry I might screw things up if I didn’t paste them back exactly.

Just copy your tlk somewhere else (or with a different name), that way all you have to do to revert to the initial state is to move it back (or rename it)

I guess in my state of mind yesterday being upset over using that editor which seemed not to work -The fact still remains that even if it works…I would need to move the lines. (which relate to some custom classes and spells) to in order to use those lines for the voicesets…which always makes me anxious and has never worked out well for me because then I forget that I have to change a line in the various 2das related to those new tlk lines I modified…seems like too much of a pain and I’m no expert when it comes to changing 2da and tlk lines related to spells and classes…lol

I have three issues:

this is a problem w/your voiceset file. in the screenshot below, you see how the character’s soundset file [.ssf] is organised by lines, one line per vocalisation. the .ssf is actually a binary file, so you’ll get nothing but gobbledygook if you try to open one with notepad, hence the need for the custom ssf editor you’re using. if, as in your case, the text the character says isn’t the same as the audio you hear, then chances are that either the entry for a vocalisation’s audio file [in the Sound column here] or the talk table offset [the Text column here] is incorrect. in this example, notice that the Text entry for the very first line is 0xC74D, which in decimal is 51021. if you open dialog.tlk in your favourite talk table editor, you’ll see that entry 51021 is exactly the text listed here [‘Get on them! Attack, I say!’].

What can I do to align what the conversation sounds are with the text that shows up above their heads are suppose to say. And how do I fix the STRREF showing up in my creation of a PC at choosing the voiceset?

assuming what you’re seeing is actually ‘Bad StrRef’, rather than STRREF, what is happening is the entries in the STRREF column of your soundset.2da file are incorrect. remember : if you use your own custom talk table, you need to add 16777216 to your references to its entries. for example, if i’m inferring correctly from your screenie that your voiceset for ‘Ammon’ is at line 2000 of your custom talk table, soundset.2da would actually need to have ‘16779216’ on that line, not ‘2000’.

Hey xorbaxian…thanks for your comments.

Yeah I know about that extra line on the tlk and yeah I’m using a custom tlk. Where did you get that editor above? That looks different from the one I have. I decided it was too much of a headache to move the tlk lines so I just did not enter the tlk lines on my soundset 2da and I just keep the wave files in my override folder. They still work but I see no accompanying text to go with them. Although I may try my hand at moving all those conflicting tlk lines to other lines and hope I can manage to pull off not screwing up the classes and spells on those current lines I have…sigh…I will save my tlk and other 2das that this will effect. I appreciate all those of you who try to help me. Thanks.

Where did you get that editor above?