EDIT: I am editing this first post to help highlight my SSD issue that may be relevant to other owners of SSD drives out there, and modding with the toolset. I have had my SSD for around four years now, and have not had any issues until the last week or so. My point is, (and also as a reminder to myself), these hard drives have a limited number of writes in their lifetime. If your SSD is three years old or more and has a low TBW rate, then beware that when using the toolset, you may also eventually have write problems that can cause some bizarre errors.

I don’t know what happened to my whole NWN2 game, but I am having some serious issues. Just to say that scripts are not running as expected. Random crashes. Broken Level up.

It’s a nightmare and all the problems appear random!

I’ll try to report if I fix things, but ask if anybody else is encountering weird stuff of late.

EDIT: OK, I sorted some of it … but have those couple of questions remaining in the next post … some of my issues were related to “copied” areas using terracoppa. (I had to re-bake a few times to get various objects to work.)

In the process of trying to work out some problems I came across this:-

And while I am here, has anybody else had problems selecting “Recommend” when leveling a rogue for the first time? It crashes to desktop for me, even with the default XML for character sheet.

These last two issues may have been throwing me red herrings, as they appear to be problems outside of my code and a “normal” NWN2 issue in my testing. Can anybody confirm?

Thanks in advance. Lance.

To give xp ONLY to the main PC (in a party with companions), you would have to do something like this:

I actually noticed this issue a while back regarding the ga_give_xp script. If its bAllPartyMembers parameter was set to FALSE, and you were controlling a companion at the time the script fired (from NPC that has Can Talk To Non-Player Owned Creatures), then only the companion will get xp. However, if you were controlling the main PC, then ALL party members will get the xp. To solve that problem, I just made a custom ga_give_xp script:

This ensures that the bAllPartyMembers is always TRUE (in single player games) regardless if it’s set to FALSE in the mod.

Thanks for stepping in and confirming that function issue … I thought I was beginning to have some sort of corrupted toolset/game. It was one of about five issues that hit me in a single testing of my campaign.

(*) I guess we would not normally notice this issue as you would not normally press “recommend” if you just created a rogue (at first level). It was only because I used that button to quickly level all the PCs (after gaining XP) that I noticed it. It was not a problem for any of the other classes I was testing with. The game crashes when I was using “Barran” (who had just had his levels reset to zero and I was leveling again with new XP) and with the default XML scripts. i.e. My XML was not the issue.

I am still working on … RWS Living Portal issues …

I am not sure how the Living Portal works as it appears to have some properties that I have not set, and also ignore some properties I am setting instead. I don’t know enough about new creature models to understand how they work or are expected to work to deal with this. For instance, I am trying to give it the ability to cast a magic missile, and it does not do so. I cannot understand why.

And then there were the normal issues, which I managed to overcome once I came out of panic mode …

EDIT: Or maybe not … (I shut down and restarted the toolset and it did not crash the second time around.) 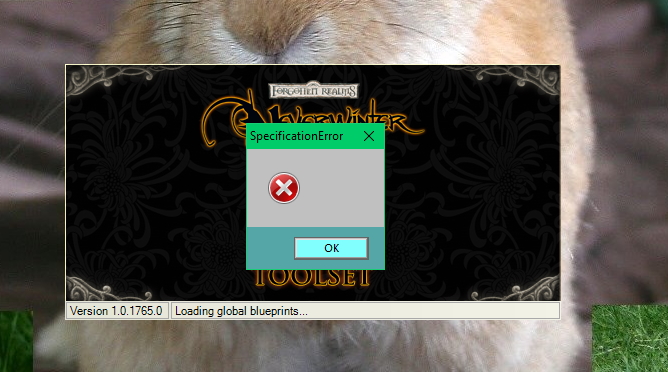 I have contacted the makers of my SSD as I think there are some problems outside of the toolset going on here now … Programs not thinking they have been updated … copy and paste not working as expected … just general weirdness all round. E.g. I updated the SSD test program two days ago, and went to run the test again today, and it asked to be updated again. Same update! As if the update had never taken place! This appears to be similar to issues with my toolset. i.e. I do something, and then have to repeat what I just did for it to work again. (NB: I did NOT do any system restores.)

I may have to put any toolset work on hold until I sort this out, which may mean a new SSD … new system install … new NWN 2 install … I grow pale at the thought …

New SSD ordered … as I believe my SSD (being four years old) was outside its warranty and likely reached its natural end of write life! As an aside, their test software reported 2% on its “life usage”, but this means it only has 2% left, and will switch to “read only” soon. 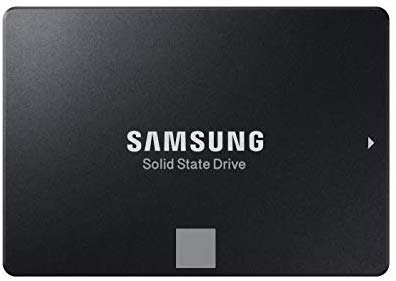 Apparently that has a better TBW value of 600 (compared to 120 of Crucial - my current one), so should last a lot longer before write fails in future. (The price is actually £129 at the moment.)

EDIT: I am editing this post to help highlight my SSD issue that may be relevant to other owners of SSD drives out there, and modding with the toolset. I have had my SSD for around four years now, and have not had any issues until the last week or so. My point is, (and also as a reminder to myself), these hard drives have a limited number of writes in their lifetime. If your SSD is three years old or more and has a low TBW rate, then beware that when using the toolset, you may also eventually have write problems that can cause some bizarre errors.

Not to mind your own business, but how did you manage to write 120 TB in 4 years? I thought this was something that only happened in stress tests made by companies.

120 TB in 4 years is 30 TB a year, which means around 82 GB written every single day for 4 years straight.
I’m just asking this because it might be the warning sign of something else gone wrong with your system, like a virus or a hardware malfunction of the disk itself.

I agree … and was why I contacted the Crucial support directly myself. However, the operator said that one of my figures, highlighted in image indicated a problem … and that the Life Percentage was “reversed” for my older SSD (apparently). i.e. It represented 2% left, not used… It conflicted with info I read, but I am trusting the operator at their word that it was beginning to fail … due to the 5555 in particular. In my own reading, however, the “Average Block Erase Count” equated to the % life and so 2% life usage would have been correct …

I decided that I am not going to take the risk and ordered a new drive to reinstall everything, as I am not convinced to ignore that something else may be off too. Offline now for a couple of hours, but will be back later.

EdIT: I already had done a full virus scan before contacting them too. 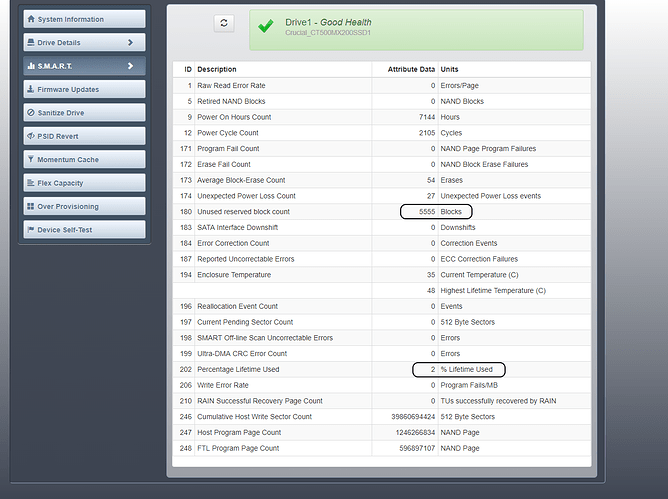