Storm of Zehir quest with parts

Anyone still playing the game?

I seem to have a fuking problem with quests that involve collecting parts from mobs. Those parts never seem to drop at all…

No clockroach parts
No dino claws
No newt axe

I’d never ever finish those quests at this rate… have killed like 100s of those mofo mobs and not a single part dropped at all.

Anyone else have similar problem?

There is only one fire newt axe and you get it when you clear the mines and kill the chieftain.

If you are killing clockroachs and dinos and not getting any parts, that’s a bug I have not heard of before.

removing it and see if it works right…

still doesnt work. checked the firenewt chief object in toolset and the weapon is not set as droppable

Sounds like it’s console time with a bit of giveitem ! I think these are a couple of them.

I can’t find the fire newt axe but if you found it on the chief then you’re in the right module look through the items section in the properties and find it’s resref or maybe it’ll show up in the chief’s inventory properties.

I’ve trawled the modules in toolset and made a list of important items to debug grant;

course some may not be needed after all

I can’t find the fire newt axe but if you found it on the chief then you’re in the right module look through the items section in the properties and find it’s resref or maybe it’ll show up in the chief’s inventory properties.

The chief is holding the weapon but it does not have droppable flag so its not dropping. Same as the other key items, in fact the lizard chief dont even have the key inside inventory. Either those key items are suppose to drop by script or some other method.

The loot mod I use should not interfere with key items, I used it for the OC and all quest items drop just fine.

If you post a save, I can check it out. I have a couple days of free time coming up. Also, post a save before entering the mines if you have one.

Can you show a screenshot of your override?

Are you actually using those droppable scripts?

We’ll figure this out.

I used cdaulepp loot system for some time and removed it. 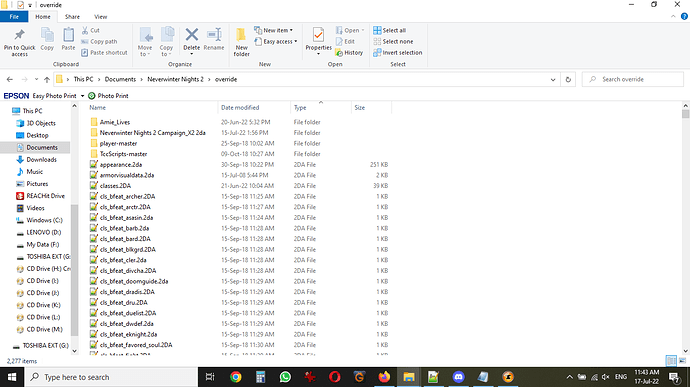 All these was stupidly spread all over the override instead of in its own big folder - this collection was added like 10 years ago.

There is no droppable script as far as I can tell, what I meant was;
The firenewt chief holds the axe; 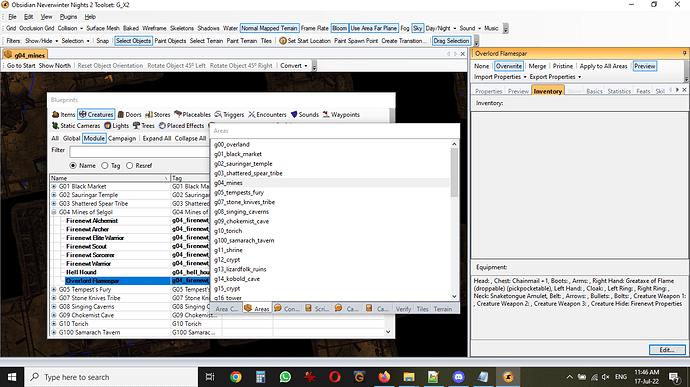 but earlier on it was not flagged as droppable, pickpocketable - i just added the flags in.

The lizard chief in the dragon den does not even have tarmas’ key, i had to add it in and flag it as droppable. Quite a few other quest items dont drop properly.

I dont have a save cause I just finished playing to the end, so will start over.

And for some silly reason every new game i start, contains all the roster entries of all the OC companions. This seem to cause other companions not to show up - all Mask companions never spawn and so unable to progress. Zehir cohorts are no show too - but thats no prob for me, I have them all as local chars and just add them during party create.

You have got A LOT going on there to parse!

First, I’d rename the Documents/Neverwinter Nights 2 folder and start the game with the new, clean folder.

Next, reinstall nwn2fixes, and maybe the Facelift Pack.

Aww there goes all my godmode items haha and sexy outfits… i guess that will have to do.

Hrmm turns out a rogue k_mod_load.ncs file has been causing all the problems. Moved it away and so far things are fine.

I’m glad you found the fix. I’m about to start a new SOZ gameplay and I always had issues with cockroaches and dinos every time I played before. It looks like Kaedrin’s mod is a bit buggy. I’m wondering is it safe to remove that file, did you have any problems after removing this file?

I dont use that mod, but I do use TCC. And the whole range of sexy mods. And Tony AI.

This time the clockroaches refused to spawn… until I rested and it spawned right while I was resting.

So if something does not spawn at all, try resting. Its still location specific so clockroaches and dinos spawn near the lumber camp, so resting outside smargol will not get them.