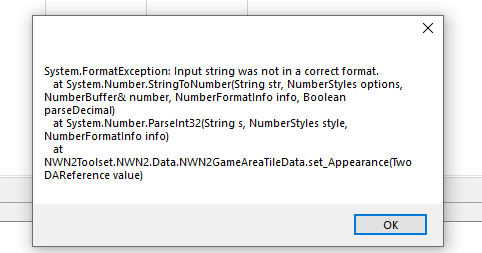 Anyone know what causes this when I sometimes open a certain zone? I can’t make the box go away, any time I hit the “OK” button it just comes right back up. The only way I can close the toolset at this point is to just use the task manager. This warning basically freezes/breaks the toolset.

I usually see that when I have an issue with my tiles.2da file. Are you using a customized version?

Have something similar when I open an area, that uses This resource in module with it. So far could not find out, what exactly in said hakpack causes this.

Not that I’m aware of. And if it is, I wouldn’t know how to tell.

Since you’re using CityHak, it will include 2da files for the new placeables. Do you have any other hak files included?

More like a workaround than a real fix to the original hak file. I’d recommend downloading PJ’s placeable cornucopia and hand pick the assets you want. City hak is among them of course. This ensures you have a clean 2da set-up.

I remember having the same issue with city hak but that was 8 years ago so I can’t remember how I solved it. I know though that all these problems went away since I started using the cornucopia.

No, I do not. Only that single hak.

I will take a look on cornucopia, as andysks recommends.

I remembered what my problem was. It is not related, and it occured after I started using the cornucopia. As it turned out, PJ had left placeables.2da in the city_hak folder and there was a conflict with the cornucopia placeables.2da. He removed it from a later version and then it was working fine.

Trying to use cornucopia, but so far encountered 2 problems:

EDIT: made it into hak by toolset extension, will now look if it works as intended.

EDIT: toolset either is not able to process hakpack this big. Trying to separate it into 3-4 haks unfortunately corrupts module upon saving.

I was running some tests here and I encountered the same problem. I unpacked the models in a campaign folder and all UTP files in the override since they don’t need to be shipped in a final version. I deleted the campaign and created a new one several times until it finally worked. The only thing I did differently the last time, was that I put the 2da in its own sub-folder in the campaign folder. For some reason the system liked this and then I had models in the toolset.