Tailor dropping item it crafted after player kills him

I’m sure this is a very old issue but I have little idea how to stop this from happening I am no scripter. Any help would be greatly appreciated.

Try cleaning out their inventory on death, like this:

Or otherwise mark crafted items with a local int, to preserve the tailor dropping their normal loot.

This is what I have on script. I’m not sure how I should change this , or is this script just for cleaning the area not the inventory of the tailor so it wont drop items being crafted. It seems very similar to your script.

// OnExit script to get rid of an areas NPCs
// Twainer

I’ve line-by-line commented that for you, so you can see what’s happening in it:

Quick scripting basics pull-you-up: There are events (examples: something is exiting an area, a creature has died, a placeable has been opened, something is entering a floor trigger), and there are functions we can call in those events, causing stuff to happen.

You could grab the tailor NPCs’ OnDeath event, and destroy the items that are in their inventory at their time of death, by cycling through them one at a time, as posted in the first example. They’re in the Scripts tab of the Creature Properties. 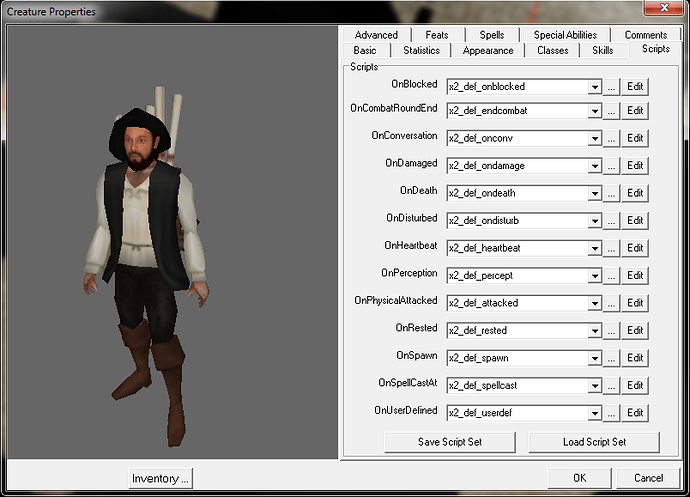 To be on the safe side, clone the existing script (when it’s open, save via Save As / CTRL+ALT+S), creating a copy of the original, so you don’t accidentally make more NPCs than just the tailors erase their inventories on death. Multiple different NPCs can be making use of the same scripts in their events, so if you edit a script they all share, everyones’ behaviour changes at once.

Why not keep it simple with SetDroppableFlag and GetDroppableFlag? You’d set the flag when finished item is transferred to PC. If anything “bad” happens in the meantime, no item will be spawned in loot bag.

I think I will try making it a plot seems like the easiest way to try first. Thank you to all that gave me suggestions , its great to have this forum to get advice from the people who are the true preservers of this game.

If you wanted a bit more fun, you could also have the tailor protected by armed guards (that are bad mo’fos), and have any Watch or Guard or whatever passes for police in your world respond immediately upon your attack, either killing the attacker or ‘knocking them out’ and putting them in jail, assessing fines, whatnot.

Yeah I feel like doing that ,I’m sure players took advantage of the tailor for free gold for a while.