I stumbled upon an old message I had sent to a fellow community member about a decade ago in which I told them about a discovery I had made, supposedly on the Vault, and I attached the following screenshot. Has anyone ever seen these heads before, do you know who created them, and if they are still to be found somewhere? They must have been part of a hakpak for a Planescape themed “Gatecrashers PW” back then in 2010, but I can’t find any trace of that PW either …

Those are the CODI heads. I believe they are in the CODI Content Package but you’ll likely find them in numerous compilations. The female heads will need the positioning fix. I had sent JennaWSI large pheno versions I did as they only had normal, but I’ll have to dig them up.

I located mine if you’re interested. The only correction I apparently missed was on one of the male tiefling heads (the pale male in your screen cap) where there’s the line down the center because the UV mapping is right on the edge of the texture. DM me your e-mail and I can send them over to you.

Cool, will do, thanks!

OK, I apologise for the offtop but I really must ask, it’s been killing me ever since I first got CEP years ago: what does CODI stand for?

City of Doors Initiative was a group of CC artists and scripters contracted to make a module set in Planescape. The project was canceled.

Ooh! City of Doors! I haven’t played Planescape (yet) so I’m not at all up on Sigil lore. Thank you!

Yeah its a good game. Everyone I know that has played it, liked it.

Ooh! City of Doors! I haven’t played Planescape (yet) so I’m not at all up on Sigil lore.

I envy you, although I’m not sure whether it would still have the same impact on me today. But I loved it, much more than Baldur’s Gate. It does require patience though, it’s mostly about discovering the setting through reading lots of text, which I might have hated in any other game, but since I didn’t know the lore before and it’s not your typical Forgotten Realms type of setting I found it utterly fascinating and soaked it all in. Most who’ve played through it agree that it’s fantastic, but I’ve also seen people on forums say they couldn’t get into it.

Anyway, I suspected that these were CODI heads, but I guess I didn’t check the Content package because the screenshot does not suggest it has heads in it, and it doesn’t have a PC Parts or heads tag on the Vault either. I guess I thought it only had full creature models.

Now that that’s settled, I might still use the thread to hunt for other heads I come across, and I encourage everyone to do the same should you look for a specific one.

The work produced by the CODI team for NWN is some of the best custom content you will find anywhere. Most of it is in CEP.

No heads or PC but some incredible work by CODI and Zwerkules on the tileset. There are also a good assortment of creatures in various states of animation completeness.

could i get a copy too, please ?

@Malagant - Would you please post the large phenos and any other fixes on the vault? I and many, many others would greatly appreciate it. Thanks!

Hey, all. I apologize for the delayed response. The holidays season is taking a bite out of me at the moment and I am full-time care-giving / household managing for a 91yo. I will get on this once the holiday is over. I hope you all can afford me a little patience at the moment and I will be able to accommodate these requests presently.

@xorbaxian Hit me up via DM and I can have that to you in the next day or two.

@Olivier_Leroux I’m likely going to start another Torment run soon. I just received the Nolzur’s Marvelous Unpainted Mini of The Nameless One three days ago and these from some guy in Russia about two weeks ago: 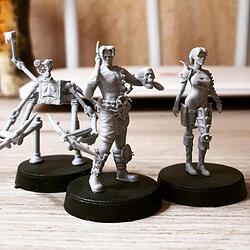 They were sold out and removed right after I received mine but I’m hoping he models and prints the others at some point.

so… does anyone else have these heads or a link to a pack containing them? i couldnt find any…
thx

i found them in codi_pc.hak which was in codi_content1b.zip
unpack them from the hak they are the tiefling heads 160+
you can just drop them into override and rename them as human heads
i didnt concern myself with repositioning them since they didnt meet my unrealistic high expectiations (horns on females turn me off)

At the end of last year when I was assembling heads for my own private use, I downloaded some great 3D head models by dafena (they might have been freshly released at the time), but a short while after, and even now I can’t seem to find the project page anymore. I’m pretty sure dafena had more entries on the Vault back then than can be found now, too. Does anyone know what’s up with that? Have they been removed? Is anyone in contact with dafena? Or did they leave the community? If I click on their name on the Vault, it just says “Access Denied. You are not authorized to access this page.”

Or did they leave the community?

AFAIK they left and deleted their stuff.

Check my reply in your post regarding Dafena. Another rumour, aside of the one I posted there. I think it was something like when Cervantes deleted his stuff some years ago because his dad asked him to. I don’t know anything other than that about his case, but I seem to remember someone mentioning a similar thing in Dafena’s case, that someone asked them to remove it or it was because of moral reasons of some kind.