OK, an obscure title I know, but here is my issue, which may have been addressed in the past before (as it rings a bell with me), but …

Basically, if a player (or host of a session) loads a game “directly” while playing the module, I have sometimes seen some really weird results occur in the play as it continued to be played. NOTE: I am not saying a fresh load (from the main menu), but the type of load if a player hits escape and then loads from that “immediate” menu offered rather than dropping back to the Main Menu first.

At this stage I am looking at removing the option to load a game from this direct method from the XML that offers it. However, I just wanted to ask if anybody else has (or did from the past) experience strange happenings when loading a game this way.

In my own experience, I have seen companions “lose” their companion status, but appear to be in the party still. However, they then start to wonder about on their own, even though the player is controlling them! (It’s like they have come alive!

Then there are all the other issues that come from carrying out any action using that “uncontrolled controlled” PC.

This NEVER happens if loaded from the first Main Menu “Load” XML. And to be fair, it does not always happen if loaded directly, which is my concern.

Anyone else, or just me?

I haven’t seen anything like that myself. Does it happen for you with a quicksave, an autosave, a regular save or all of them?

Because of the infrequent occurrence (but happens more often than I would like), I can only say that all savings (quick or otherwise) appear to save just fine, but it’s to do with the way I have reloaded them.

i.e. Occasionally, a reload of any save type (via the top reload menu) causes these issues.

However, to give you an idea, it’s happened about 4-5 times in around 40 reloads, so around 10% of the time. i.e. It’s fine if I spot errors creep in, as I know what is supposed to be happening (which is what we did if I accidentally forgot and reloaded this way in our MP session and caused an issue), but it also happened to my wife (playing SP) and she did not realise it was a problem until she asked me for help. Then the way of loading came to light again.

Because other players may reload a game this way (and I am not there to explain otherwise), I am considering disabling this load method to circumvent the times such a load does cause players issues without them knowing it.

I decided not to risk loading from the direct LOAD button from the options menu any longer and have now redirected the button to drop to the “Main Menu” where the player can load instead. i.e. It basically does the some as the Main Menu button, but its wording acts as the pointer for the reload option. There is a very slim possibility (although testing to date suggests otherwise) that the “henchman fix” that is already added to the XML files may have been affecting somehow - even though the called script had nothing to work on at the time and so should not be the issue at all! So, honestly, I don’t think it was that, but mention it just to be clear. Furthermore, without the henchman fix, the game would crash anyway (if you have henchmen).

EDIT: It does make me wonder why this “direct load” option was made available and how it differs from the one from the Main Menu though, as there would be no real reason to add it otherwise. (Does it keep some variables active for a faster load?)

I also updated the “DEATH” GUI to do the same thing, so it now allows either RESPAWN (SP only), MAIN MENU (LOAD) or QUIT TO DESKTOP.

These will be packaged with the next release of The Scroll v2.64 +

Here is what the altered options menu now displays. 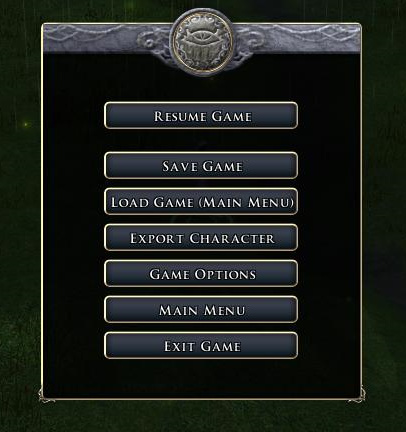 edit: or leave it as “Load Game” but disable/ghost it …

I did consider that (and may still do that), but I did not want to possibly confuse a situation where the player may not realise they can load a game … or be confused if they were expecting the normal “load” screen without going via the Main Menu. And I did not want to grey in case, again, it worried the player that they could not save (forgetting the obvious Main Menu route), and the thought of a gap did not sit well with me … Of course, I could shuffle them all a bit, but that’s something I may come back to …

In the meanwhile, I am trying to sort of some very old code (years back) when I first played around with the map area code (which I need for the second module). It’s terrible coding compared to my later stuff (I like to think) and so am trying to sort through that at the moment … and trying to get that to work with my Module to module swap and to cater for MP handovers, while trying to keep important campaign variables … and henchmen intact is taking me away from other such niceties at the moment … and my wife still finds the annoying bug that I have to sort!

But, time will tell …