The Tale of Fur and Frost - a Single Player Outdoors Adventure - is now released!

IMPORTANT UPDATE: VERSION 1.0 CAME WITH THE STARTING POINT IN THE WRONG AREA! PLEASE DOWNLOAD V.1.1 FOR THE CORRECT SEQUENCE OF EVENTS!

With equal parts excitement and trepidation I hereby announce that my first ever NWN1 module has been released!

You can get it from the Vault right here.

The Tale of Fur and Frost is a small Single Player adventure module that aims to give you the experience of travelling though the great outdoors, relying on your skills and fortitude (and possibly on your one companion) to survive in the harsh winter and save an old forest from a supernatural disaster.

While the adventure has strong druidic themes, all classes (and races, alignments and genders) are available, and your PC need not necessarily be a treehugger.

This is my first ever project of this kind and I am interested in any and all feedback, but I also just hope to offer a few hours of fun.
Good Hunting! 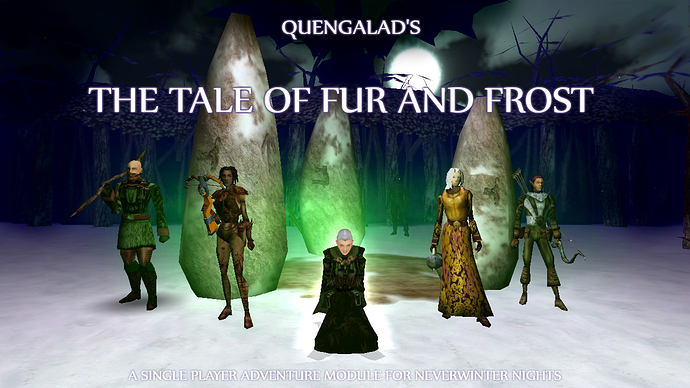 Well you have your first down load. I will let you know how I like it soon.

IMPORTANT UPDATE: VERSION 1.0 CAME WITH THE STARTING POINT IN THE WRONG AREA! PLEASE DOWNLOAD V.1.1 FOR THE CORRECT SEQUENCE OF EVENTS!

(Also please forgive me for this idiotic mistake)

Now that you’ve moved the starting point, I’ve been having a much more enjoyable time with the module. Thus far, the writing’s been nice, the areas have been good, and there’s been quite a bit of challenging to some of the encounters, but I’ve hit a bit of a snag with the “Missing in Action” quest that, had the module not made an Auto-Save a while earlier, might have just killed my playthrough. I’ll put that in a spoiler below as to not spoil the encounter for others and to not clutter the thread, as unfortunately I’m rather long-winded when I post on any forum, but I’m at a loss as to what to do outside of reload the auto-save and not do the side quest, which is something I only want to do if necessary.

Okay, this is the weirdest shit.
And to think that the whole rigmarole with the wrong starting point was that the last thing I did was test the spectre encounter to make sure it was all right.

For crying out loud.

It does seem like you’ll have to forgo the sidequest, because somehow, the spectre from the temple got a henchman script set (go figure) and can’t even be killed by the console now. I’ve no idea how this happened, it was all nice and working!

I’m sorry this is such a screwup. I’ll do better next time, I swear.

Oh and as for being stuck in places you can’t get out of - this time, it’s due to my mistake, but there is one place where you may get stuck on purpose if your search skill is low, so before that happens, you may want to talk to Liam again once he’s back in the stone circle and ask him for more help.

Don’t worry, like I said the module has been good so far, and I thank you for getting back to me so quickly. With any new module, no matter how good, you can expect its launch to have some quirks and abnormalities. At this point, I think these ghosts are just trying to sabotage you.

But now its time for me to be angry at myself. I already had the item from Liam, but in my attempts to escape I tried to use it while my companions were fighting the Spectre. Good news, you can’t gimp it like the Stone of Recall, as it can’t be used in combat. Bad news, it only has one use per day, and I can’t rest in the area. Unfortunately, in my hubris I saved after this attempt, even though I could simply run away from the ghost and kill him when his respawn point was out of sight. In short: I’m a moron. Why I thought it was a good idea to save after I discovered what appeared to be a bug, I can’t tell you. Oh well, at least I’ll get my firebomb back.