Does anybody know why or how the colour has disappeared from these crystal placeable objects?

I even tried adding a colour glow effect and removing all shadows from them (or to them) and they still show without colour when in the game. 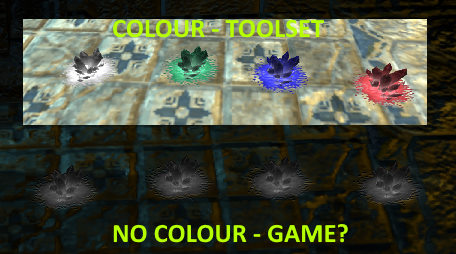 But it’s not only the crystals that lost their colours. The floor is black too.
Could this come from too many lights on the tile?

Or did you mean they should glow in the dark? In that case, they probably don’t have a glow map.

There is only basic lighting for the area. The toolset has the lighting “switched off” for ease of view.

What is a “glow map”? Perhaps you are onto something there.

Do you want them to glow in those colors?

That was my intention … Or at least look the colour. (I also have larger versions, which I tried adding light to. That sort of works, but I had hoped to have them look the part without extra lighting if possible.)

Are you just tinting the stock object or are you using custom glowing crystals (I made some for instance)?

The glow from glowing objects doesn’t stop tinting, but it usually makes the tint barely visible

NWN2 uses between 2 and 4 texture files for any .mdb object. The main texture (“diffuse map”) and the bump texture (“normal map”) are compulsory (the first one gives the object its base colours, the second one its 3D details).
But you can also add a tint map (where red, green and blue channels correspond to the color1, color2 and color3 settings in the placeable blueprint.)
Finally the self-illumination map (or “glow map”) is used for making the object glow in the dark, as its name implies.
The good news is that even if the standard object doesn’t have the glow map you can add one with a special effect (.sef) file.

These placeable are useable scaled down crystals of the “TINT” type: Crystal {B02 (X2) [TINT]}

I even added the “fx_light_white_05” sef (and other related colours sefs) to help make the placeables “glow” the colour I had made them. However, they remain drab looking and dark in the game itself.

The lighting for the are has been turned “off” (all black), but does have “lights” from torches or magical lights lighting the area. I was hoping these tinted crystals would even add an element of “light” from their shining presence, but they do nothing.

@Kamal: I would be interested in seeing your glowing crystals. EDIT: I think I found your stuff: https://neverwintervault.org/project/nwn2/model/kamals-natural-glowy-stuff I will check these out a little later, but hopefully, they should do the trick!

I tried using your crystals , but ran into a problem as I tried to setup the blueprints with my newly setup placeables 2da for them.

I thought you may like to know. (Image below.)

Any idea why it would do that for me?

All I had done was change the 2da rows and was in the process of setting the correct model/image with the correct blueprint for said 2da row. I have not had any problems doing this sort of thing before, but as soon as I went to do the second crystal, the error struck and carried on after that. Had to control-alt-del end task to get out. 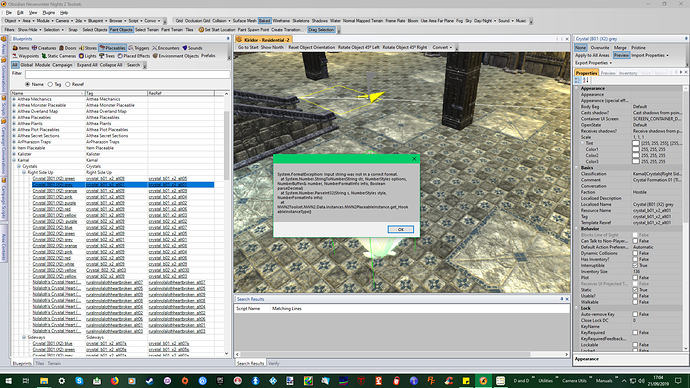 The appearance is not set in the blueprint (in the properties window, at the top), presumably due to the 2da change. If you have an area open and have the blueprint selected, when the mouse moves over the area window the toolset tries to place the object, which is invalid due to appearance issue.

If you close the area window you can set appearances without this issue. Once there is an appearance set, you will not see the error.

If you close the area window you can set appearances without this issue. Once there is an appearance set, you will not see the error.

I will try that next time then. Thanks for the heads up. I’ll let you know if I have a further issue.

However, they remain drab looking and dark in the game itself.

After checking a few mdb, I noticed that the glow part of the placeable is named after the placeable with a _g at the end.
For instance, for plc_crystal, the glowing part should be named plc_crystal_g (and of course its UV mapping match the glowing area on the self-illumination map).
Sorry for the oversight.

After checking a few mdb, I noticed that the glow part of the placeable is named after the placeable with a _g at the end.
For instance, for plc_crystal, the glowing part should be named plc_crystal_g (and of course its UV mapping match the glowing area on the self-illumination map).
Sorry for the oversight.

Is that for the French version? In English, it’s usually ‘_i’ for illumination map.

I managed to import and setup your crystals by avoiding opening an area as you suggested, so thanks for that!

@ 4760: I noticed that the crystals ARE ALSO WITHOUT COLOUR IN THE TOOLSET when the lighting is switched to that being used in-game. I had not tried that before, and so it appears that the tints do lose their colour subject to the surrounding lighting. I was not aware of that. I guess I was imagining “glowing” as opposed to colour that cannot be noticed in low light environments. The good news is that Kamal’s crystals DO glow in the darker environment. 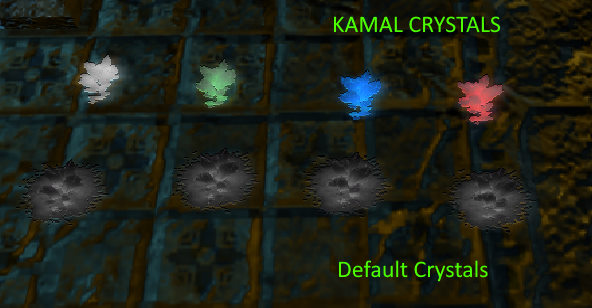 it’s usually ‘_i’ for illumination map.

Yes, that’s correct. But as you said, it’s for the map. For the placeable itself, it looks like the glowing part ends with a _g (inside the .mdb)
However I’m not sure if it’s really compulsory or if it’s a naming convention, since mobile glowing parts don’t end with _g but still glow in the dark.

There’s no need for a glowing model part to end in _g. Must be a naming convention they used. I’ve made lots of things glow without a _g.