[Toolset] how to manage with party creation via script?

But there is a way to set this in a module via script?

I know, I make a lot of questions this days.

I don’t know if this is what you’re looking for, but in the module I’m creating right now I’m using Colorfade’s and Andysks Companion System: 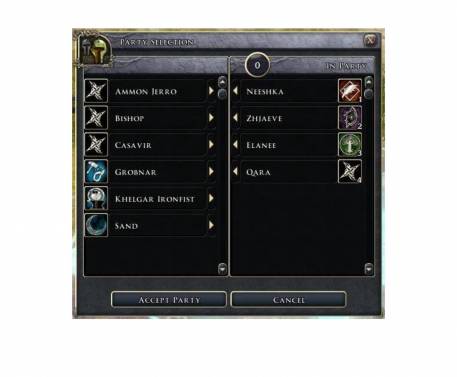 Spawning, removing and hangout spots like in the OC.

It’s based on the party handling in the OC. So if you want the GUI where you choose which companions to go with you at the moment this is pretty neat. (I have however encountered some small strange bugs with hangouts even though the scripts looks extremely well thought out and solid, I think it may come down to my limited knowledge in scripting though)

Nope, for party creation I mean custom imported characters.
By default they are four.
Campaign editor plugins allow to change the number, but how via script?

how will they be “imported” into the game? If the intention is to put them into the party by design, then it’s up to the designer/builder to check how many party members there already are and script accordingly.

On the other hand, if using the party selection gui, these functs get and set the limit of Companions available to the player.

/as far as i’m aware

oh, in the PartyEditor “Party Members 4/4”

i looked through ‘partygen.xml’ but didn’t see anything, looks hardcoded to get/set the value only from/to the Campaign file.

didn’t see anything particularly interesting in NwScript.nss either …