Well I’ve never tried this before and the results have proven a bit disappointing. I added a second module to the campaign, expecting it to transfer over the campaign scripts, conversations, and blueprints. Nothing happened. There’s not even a way to export/import them over. Does anybody know a trick for doing this?

If you’re using the directory mode, all you have to do is copy the files from the first module to the second one.
If you want on the other hand module scripts, conversations and blueprints to be available for the campaign, just move the corresponding files from the module directory to the campaign.

Thanks. I was already able to transfer module content using export/import. The DLG files are in the campaign folder but don’t show in the second module. Not sure why.

Have you “set your module to use the selected campaign” in the campaign editor then save it?
Afterwards all campaign resources, scripts, convo, journal, blueprints … are available for the module.

Not sure of the campaign editor command translation, my toolset is in French. 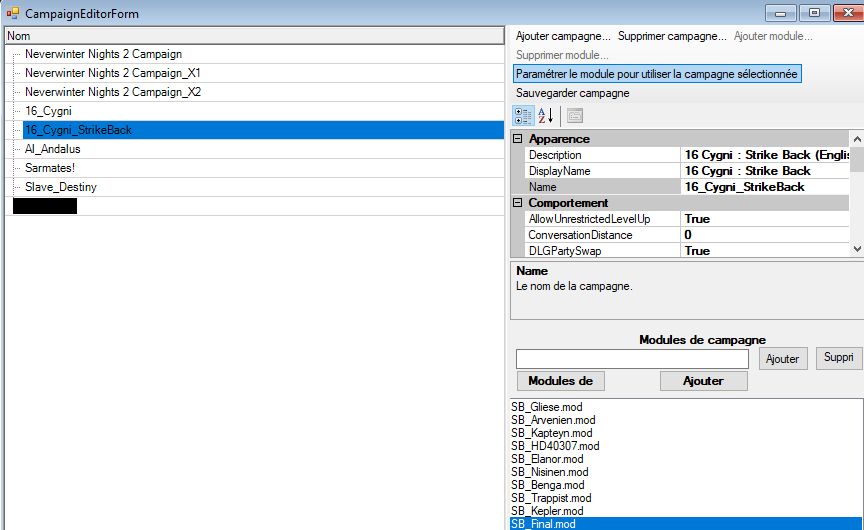 “ set your module to use the selected campaign ” in the campaign editor then save it?

after saving the campaign-switch and module, close and re-open the toolset to your new campaign-module

Okay yes, that did it. Thanks guys.

If all your scripts are already campaign scripts (and campaign conversations) and you have the module added to the campaign, then they are already automatically present and you do not have to copy anything across.

That is why I now make most of my scripts and conversations campaign rather than module, because even if the new module does not need them, they are easier to (a) patch or (b) look at as examples in the next mod.

Yep. In my case, many of the scripts and conversations are specific to just one module; I just include the cross-overs in the campaign section so it’s a tidy and compact list.

In my case, I believe I have more “campaign” scripts than “module” scripts, as I tend to try to script “multi-purpose” scripts now that can simply have different variables passed to do different things if possible.