Since I’m now working on a sci fi module, I was thinking of having a fight between two space ships. Claudius33 was very graceful enough letting me use one of his outdoor areas from his 16 Cygni series as a template. So what I did was strip the area of everything just leaving leaving the ground and setting the time to be at night. That so far looks pretty good. However, there’s one thing I would have wanted and that is for the ground to disappear. Is it possible to somehow have ground that’s invisible or transparent? Here’s a screenshot of how the area looks at the moment: 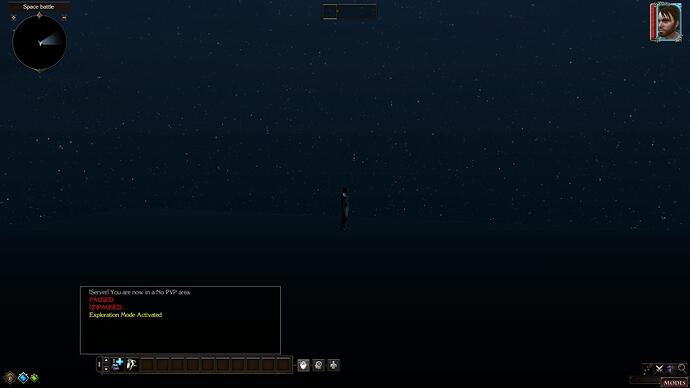 Hmm, so maybe I have a sort of a workaround. I created a flat walkmesh helper high up in the sky and set the Set Start Location there. If I tilt the camera the right way, it looks good now. However, since this is a normal fight (at least that’s how I think I will do it) the player would be able to tilt around and see the ground below. I don’t know if there’s a way to force camera angles when you’re in a fight? That’s not possible I think? 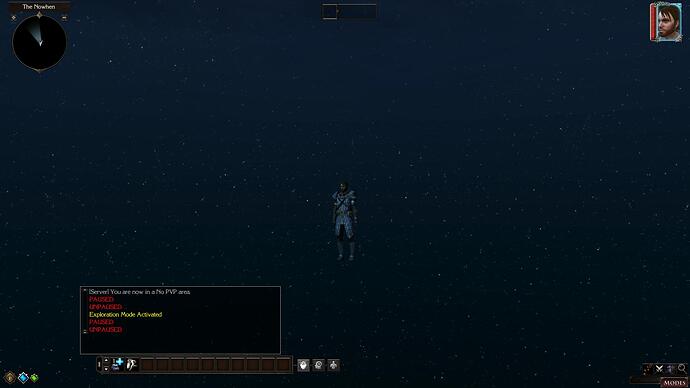 @kamal wrote this a while ago about 16 Cygni Strike Back pre release pictures :

Blockquote
One trick based on the screenshot shown of the frigate in space: If you put the ground level far enough above the player, you can’t see the ground at all because the underside of the ground has no texture. You can use walkmesh helpers then for your ground. That way the stars will be visible everywhere you look.

Ok, so exactly the way I did in the post above,

I created a flat walkmesh helper high up in the sky and set the Set Start Location there.

just that I need to get the walkmesh helper even higher then.

EDIT 2: No, wait a minute. Kamal meant to have the ground above the player? That’s a bit weird, but that’s also a solution, I guess. Anyway, I’ll go with my alternative for now. Both are sort of the same solution anyway.

EDIT: Ok, after a few tries I finally managed to do it. You had to place the walkmesh helper REALLY high up though for it to work. Still, it would have been a lot easier if there was such a thing as transparent ground, so if anybody knows of such a thing, let me know. Until then I’ll go with this solution. I’ll mark this as the solution until someone tells me of a better alternative.

If you set ground level to 100 it’s so far above the camera there is no way for the player to see it (without console commands or something) as the bottom of the terrain has no texture. I did this for an area in Bedine.

While not from Bedine, here is an example. edit: removed, I messed up on the baking, see posts below. 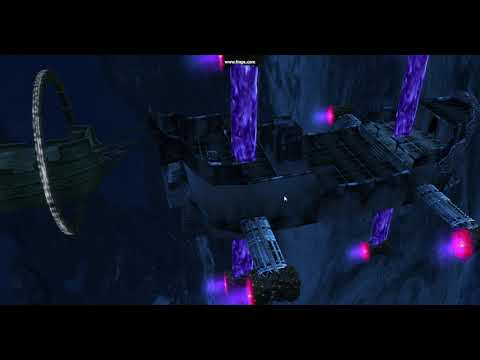 You could also battle over a planet. 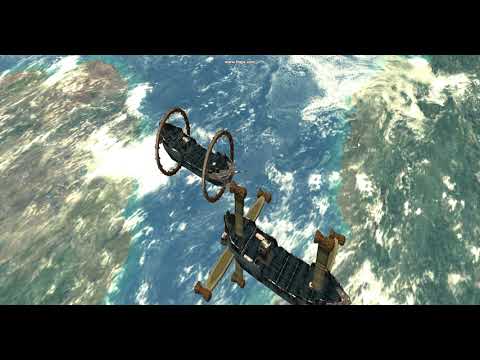 from Bedine, if you look on the minimap you can see the player is actually standing in “midair”, which is technically below the ground level at that location. This is done via a combination of terracoppa and using the walkmesh from one version of an area in another version: Kamal's NWN2 blog: Making the walkmesh and ground be two different levels 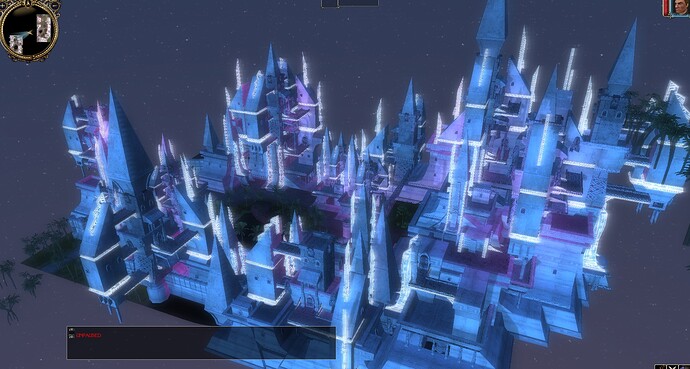 Is it better to raise the ground level than raising the walkmesh helper and placing it high up in the sky, you mean?

EDIT: Sorry, but I suck at areas. I actually don’t know how to lift all the ground to 100 (whatever that means). I can’t even select the ground. Do you mean you do it with Paint Terrain or something like that?

Yes, the Raise Terrain option when painting terrain. You build the area with the walkmesh at it’s normal height, so it’s much easier to build the area. Then once you’re done building it, you use the raise terrain and raise it to 100.

Sorry, but I don’t think I get it. Maybe I need a tutorial or something to understand what you really mean here. Here’s a screen shot of me doing it wrong:

I think I’ll just have to do with my own approach of putting a walkmesh helper high up in the air. It’s a bit hard to edit the area this way, but at least it works for me.

Give me a bit

Before raising the ground, I put down a walkmesh helper and a building, and height locked them into place so they dont move when I move the ground.

Ground, select the flatten option and flatten the ground to height 100. Flatten paints the ground to the height faster than raise terrain. You can also paint the ground black if you want it to be black on the minimap for space. Zoom out and paint the terrain with the non-walkable so it knows to only use the walkmesh helper. Then bake. 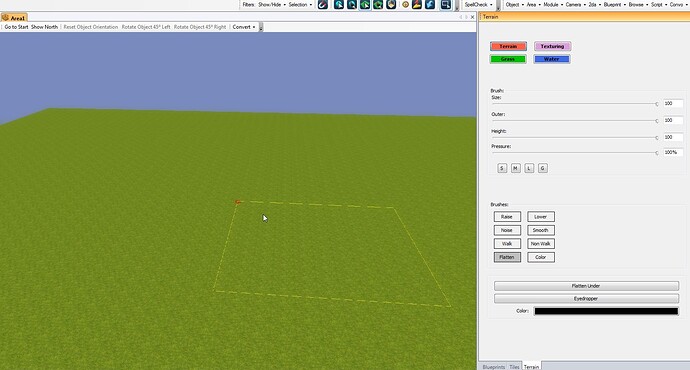 Now, you can see what it looks like in the toolset as I raised a part of the area to 100. 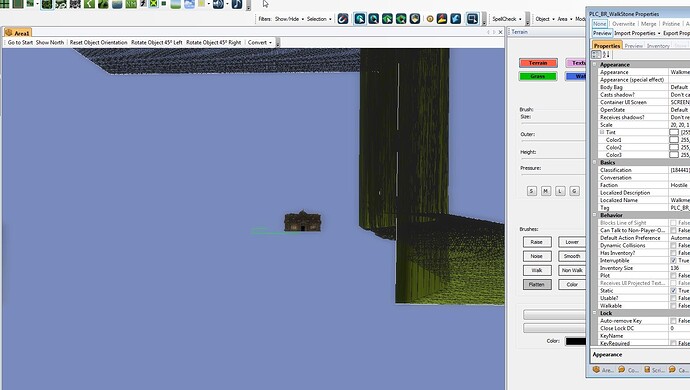 And what it looks like ingame. I left some ground at “ground level” so you can see how the underside of the terrain has no texture on it. 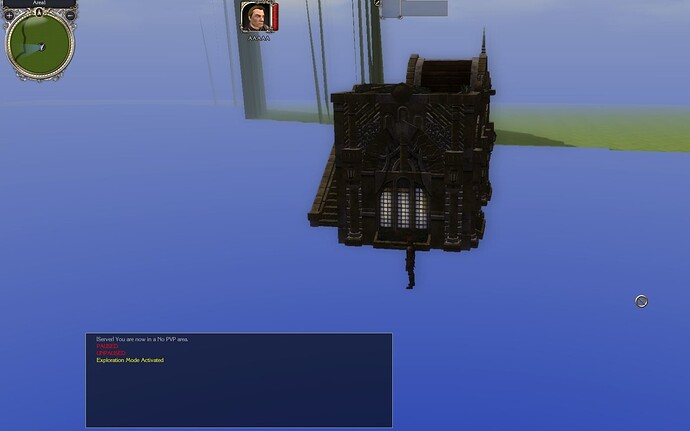 Thanks you for your patience and for trying to help, @kamal, even though I feel like this is beyond my skills. Looking at test_spelljammer I got an error when trying to look at the area. When trying to look again, I could see it but it was just black ground and two raised walkmesh helpers or something like that. Didn’t quite get why that would be a better example.

When looking at test_space I think I understand better, but there’s still the area around the walkable area on the ground. How do you get rid of that? I’m really sorry, but this is exactly why I’ve always used prefab areas. I just don’t get how to make outdoor areas. 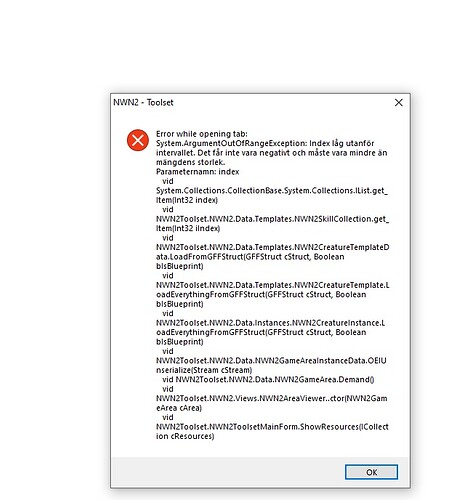 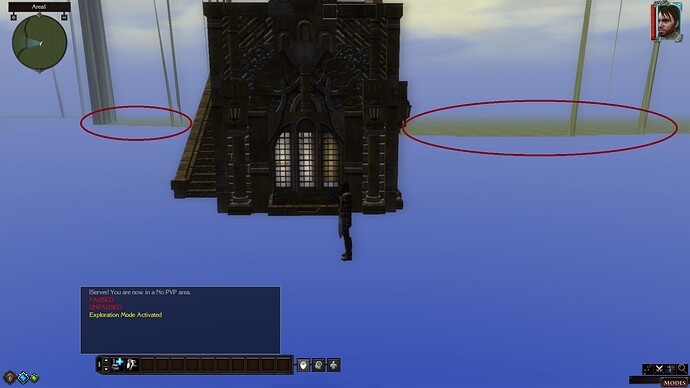 And I have to ask one of my original questions again, since it was never answered: Why is it better to do it this way than the way I did? The only answer I can think of is that it’s easier to edit the area when things are on the ground so to speak…

Oh, good grief, when I try to follow your instructions it still doesn’t look at all like it does in your test_space. Again, I don’t know what the heck I’m doing.
Alright, I’ll erase the area and start again. (Thankfully I can always use my original solution if this doesn’t work out).

EDIT: I’m going to do a step by step demo of how I do things and then you can tell me what I’m doing wrong again.

So here’s how I did it, trying to follow your instructions: 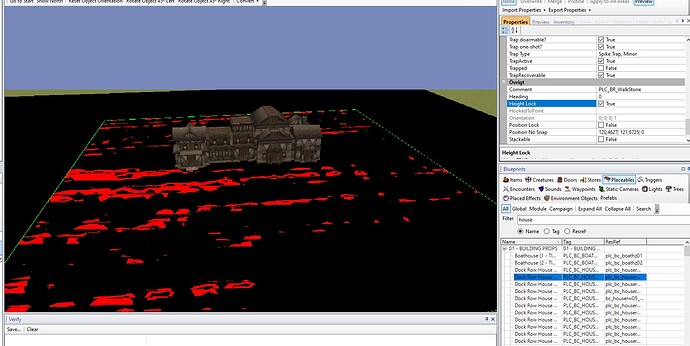 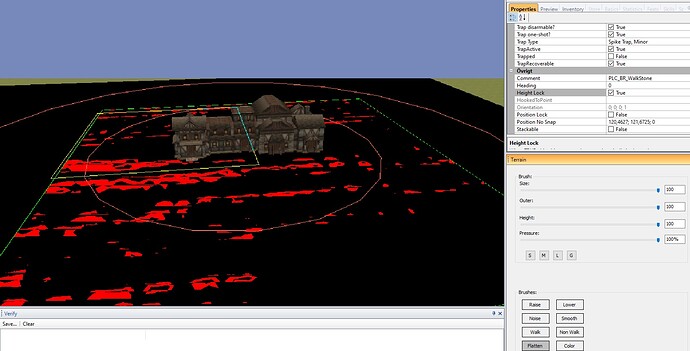 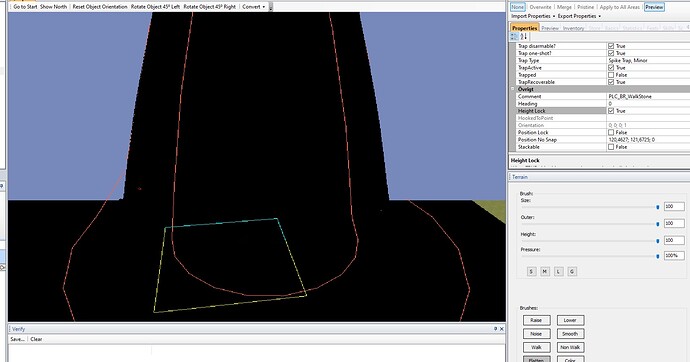 And now it doesn’t at all look like in your pictures.

EDIT: I made the heightened ground unwalkable and baked again. Ingame it actually almost looks alright now, but I can still see ground beyond. Can I just erase that ground somehow? Maybe that’s easy? 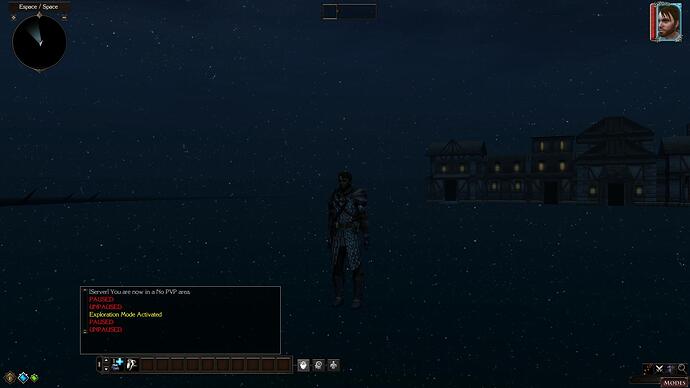 angalf… You can raise all the ground not just what’s in the walkmesh helper or the big walkable square bit just move the circles around to cover it all and get it up in the air.

But when all is said and done…

Thanks @Tsongo! That did it. I don’t know if this was what Kamal was meaning but it works now. The one thing that’s so much better with this way is that when I had the walkmesh helper high up in the sky it was REALLY hard to find it amongst all the blackness of the area. Now I can find the house quite easily even if it is “inside” the raised ground. With the Collision C2 Data on I can find it.

Yeah, I don’t know if it will look ok yet. 4760 is going to make spaceship placeables, when he has the time, (the ones from rjshae’s modern pack) into creatures, and that way we can hopefully polymorph the PC and some guys into the ships and then the battle can begin. I’m quite excited about this, but I’m also afraid it’s going to look lame when testing it. We’ll see.

EDIT: Come to think of it, just a reminder to myself, I’ll make sure to use Lance Botelle’s system with the GUI to change the portrait of the player into a ship portrait.

Good luck… I’m going back to my world of swords and axes now.

ps. If you set the area to always night and no day night cycle you get a really big moon which you can move about in the default day night cycle stages bit. Look for sun moon direction. It may even be possible to colour it I don’t know.

That day and night cycle is really weird. I’ve tried setting it to always night in this area, but it doesn’t work for some odd reason. So, I did what Claudius33 had done in his area, which this template came from, and set time to 22:00 hours through scripting. My guess is that the space battle won’t take that long, and after that we’re going to go inside the ship again, so in this particular scene I don’t think it will be a problem.

I’ve seen the moon when playing modules, but in this case I don’t think I want that. The battle is supposed to take place without any planets nearby. Of course if you could color it, then that could create a whole bunch of possibilities, but I highly doubt that is possible.

EDIT: Arrgh! Found another problem. When doing it the Kamal way I couldn’t walk on the walkmesh helper, so this doesn’t work still at the moment. But he said something about not baking…maybe that’s the problem here. Ok found his quote again:

You place all your stuff, bake, then as the final step raise the ground level to 100 meters (and don’t bake after that).

I’ll try and redo this a second time. Hopefully now I will get it right.

Use the flatten bit in the terrain editor to get it back down, bake it and move it back up.

Thanks but I already started from the beginning again. Still, good to know if I fail again.

EDIT: It still doesn’t quite work. I do all the stuff. Place my waypoints I want on the ground. Make sure they are height locked Make the ground non walkable. Bake. Then I lift the ground up. Then when I look at it ingame, my character teleports from another area (this is by design) to this waypoint, but even though he ends up where he should, the ground is now black and the walkmesh helper is flickering with red. However, I believe that if I bake now afterwards I won’t be able to walk at the walkmesh helper.

EDIT2: Here’s how it looks ingame: 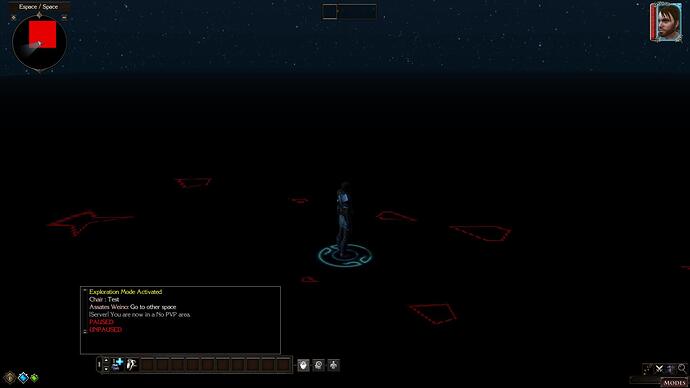 EDIT3: So I baked a second time, although I shouldn’t have according to Kamal. Now it appears that he can actually walk, but his arms are outstreched and he’s floating (I think, it’s hard to see with space and stars all around). Sigh, this was harder than I thought. Again, I might go with my original solution.

I checked again and I was wrong on the note baking again. If you’re just going with walkmesh helpers, then you can raise the terrain up, paint it all as non-walkable, and back.