True Vision and Light EE by the Grymlorde 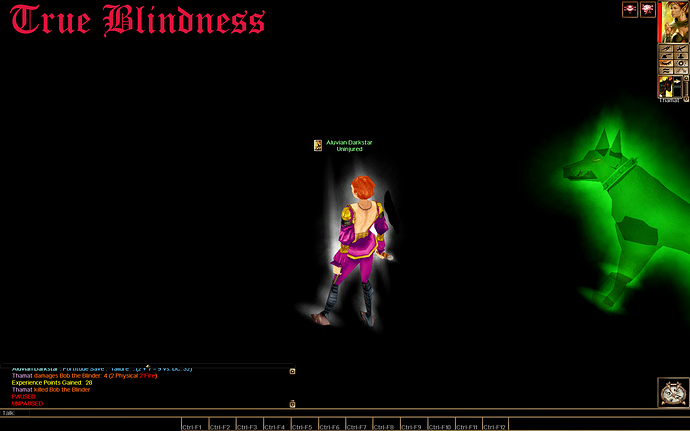 True Vision and Light EE by the Grymlorde
Want your PCs to be blinded when under the effect of a blindness spell? How about in darkness when under a darkness? Well who wouldn’t, right?

And what about those of use who want to play NWN under 3rd edition D&D rules which NWN was actually based on? In other words, why are the lights so bright?!? Torches and light spells are supposed to be only 20’ of good light with 20’ of shadows. And for that matter, in 3rd edition darkvision gives excellent vision in the dark up to 60’ away but NWN gives. . .?

And for folks who prefer the Basic, Expert, Companion, Master, Immortal, and Rules Encylopedia rules, wouldn’t it be nice to have light spells, torches, and infravision that match those rules?

Well check out my True Vision and Light EE packages! There’s a D&D 3rd edition version, a BECMI version, and a true metric version of the BioWare lights and vision. All built upon the Enhanced Edition of NWN and Symphony’s HDR shader replacement.

Oh and for those of us who prefer “realism” whenever possible, according to an article published in Popular Mechanics in the late 19th century, torches give off a good light for 10-20 yard radius, depending on how clear the night is — in other words, Holmes got it right when he wrote the first rule for D&D torches giving off 30’ of light in the dungeon. So please use my BX package for “realistic” light and vision.

Updated to version 1.01 wherein I removed Symphony’s HDR shader. His shader is no longer need with the latest (.15) patch for EE released today.

Also, the “object sometimes stays green” bug is now gone, thanks to the changes in reset lighting.

The most recent version of NWN EE boosted the power of the light sources. In the first EE release, a 20m torch gave off 13m of light. Now the same torch gives off more than 40m! The new 5m candlestick gives off a 25m radius! Humans & Halflings have an inherent vision that now extends out to 15 meters! And if that wasn’t bad enough, the latest version turns on Vibrance and High Contrast by default! In other words, by default no artifical light sources are needed in the latest version of NWN EE.

But if you want to explore truly dark dungeons and caverns lit only with candlesticks or torches, then this is for you!
This package contains models VERIFIED FROM IN-GAME MEASUREMENTS! Yes, that’s right! Thanks to Buddha for creating a 5 foot placeable and a 5 meter placeable, it is now possible to measure the radii of the four hand-held light sources in game!

What about other versions of D&D?
The other editions have some extreme ranges which make it difficult to fit into a standardised release. However, the following are decent approximations:

What are the real-life values of candles, torches, etc.?
According Scientific American Supplement. Vol. XXIII, No. 586 published on March 26, 1887:
“Torches consist of a bundle of loosely twisted threads which has been immersed in a mixture formed of two parts, by weight, of beeswax, eight of resin, and one of tallow. In warm, dry weather, these torches when lighted last for two hours when at rest, and for an hour and a quarter on a march. A good light is obtained by spacing them 20 or 30 yards apart”
Given that the testing was done at night rather than indoors, I think a torch gives off a “good light” when they are 20 yards apart (10 yards each). However, that does not mean that they have a 10 yard (30’) radius. I define “good light” as being able to read a scroll, book, etc. In order to do that, each torch must have a 40’ or 45’ (15 yard) radius so that the two overlap. Also, note that the Scientific American report did not take into account the metric system. So it is possible that we could read ‘metres’ instead of yards.
However, not all torches are equal. I have observed that some give off a yellow light and others an orange light. The ones with an orange light must be less than the yellow light. As it turns out, the English language has a term for dimmer torches, namely “firebrand.” Thus we can have 40’, 15 yard (45’), or 15 metre yellow torches and 30’ (10 yard) or 10 metre orange firebrands.

Keronsene “lanterns” were invented in the mid-1800s thus are anachronistic. Real lanterns are just a candle in a box. In some cases, there were large lanterns with 3 candles which would give off double the light (10’ in 3e, 20’ in 5e, 10 yards in BECMI, & 10m in BioMetric). If you want lanterns in your game, then please use the dim or low lights.

Bullseye lanterns made with candles were technogically possible but NWN does not have a cone of light effect.

Reasons for this custom content:
BioWare gave Humans and Halflings “candlelight” vision which allows them to see in what is supposed to be pitch black darkness
BioWare implemented a light model which simulates distance in meters but in actuality is not true meters, e.g. 5 meters dim is actually [13 meters!]
The default torch at 20 meters, is brighter than torches in every single edition of D&D AND real life
The light spell as written creates a 15m r. white light on creatures but a 20m white light on objects.
Not only is this inconsistent, every edition of D&D has the light spell with a 20’ radius or smaller and a bright torch (yellow) color at best.
The continual light spell in every edition of D&D is not equal to full daylight for wizards & sorcerers. Likewise for clerics in 3rd Edition and AD&D.
Dim lights do not give off shadows by default. Now they do.

Builders - Option 1 (Recommended): Create your own hak using NWHak and the contents of the override except for the scripts. Import the scripts directly into your module.

Anachronisms in D&D
Note that D&D has the following anachronisms, which I encourage you to discard:

Light & Continual Light spells
In my opinion, a cantrip should only grant candlelight and not torchlight. Likewise a 2nd level permanent light spell should only be candlelight rather than torchlight. Therefore I encourage you to change the light & continual light spells to dim (“5m”) orange. If you want to give your magic swords light, then do it based on the plus, e.g. +1 has a dim light, +2 a low light, +3 normal light, and +4 and greater a bright light.

What I did not do:
As noted above, I did not set the lights for candle placeables to 5’ (3e) because the game does not support a wide continuum of placeable light values. I tested candles (dark orange) set to 5m and the other lights were still too dark. 15 metre Pale Yellow is the best compromise unfortunately.

I also did not disable the lens flare effect for creatures, spells, and items. In my opinion, this helps to differentiate the magickal from the mundane. If you wish to do so, just ask and I’ll share what I’ve learned.

OPTIONAL SHADER
In the related projects, I link to Symphony’s HDR Shader. It does a good job making darks darker and brights brighter. However, the latest EE release breaks his shader. In time, he will update it. So use with caution. 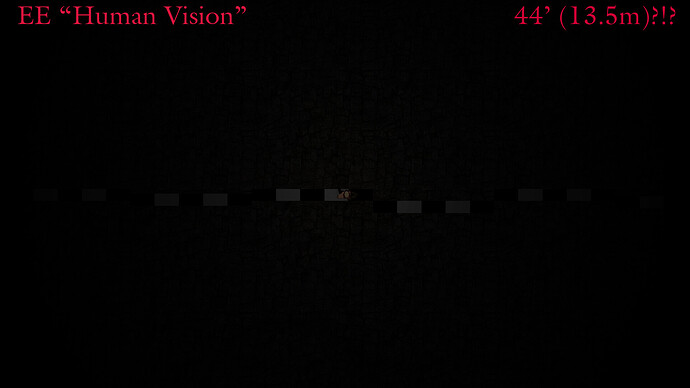 Recently the EE enhanced lighting engine was release and now Humans and Halflings can see in the dark up to 45’ (15 yards of 13.5 metres)! Who needs light sources? 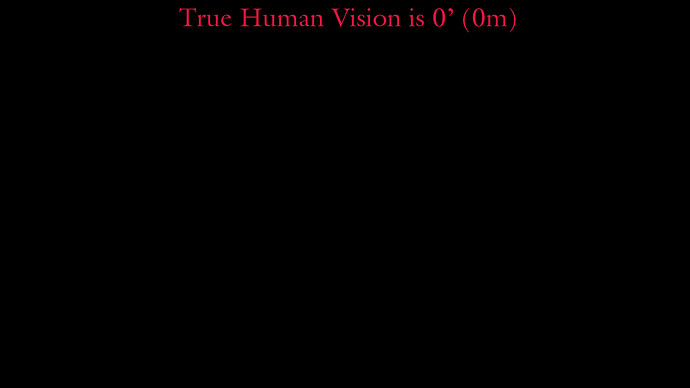 This is what Humans and halfling are supposed to see in the dark! Nothing! Zilch! Nada!

Here are the various torch illuminations from the PnP sets: 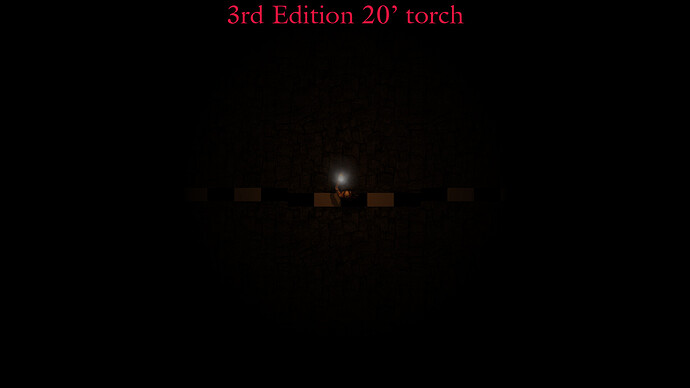 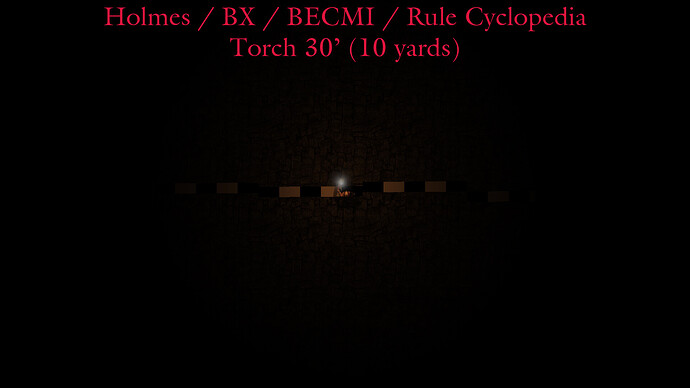 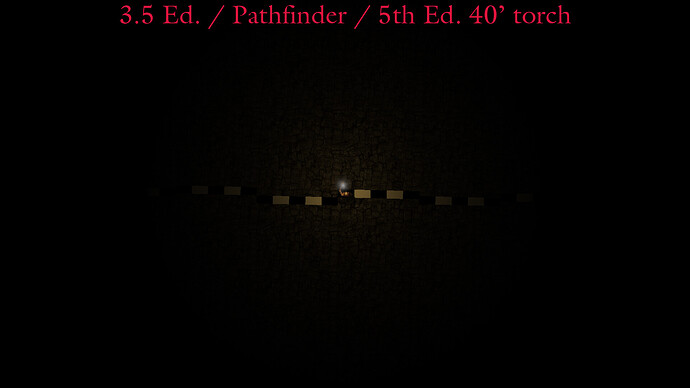 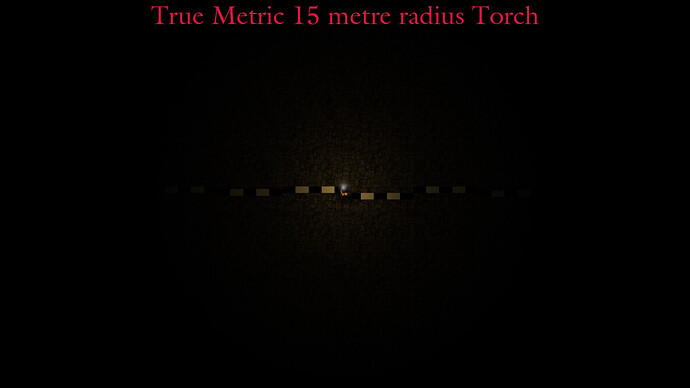 At the request of @vapidchap, I posted an optional script override & erf for True Seeing. Now with added Ultravision!

I normally play low-level adventures, so I didn’t realise that NWN’s true seeing did not pierce non-magical darkness, unlike the 3e version. This one does.

Now if only it were possible to pierce magical darkness. . .!