Turning a male head into a female head

I was about to take the male head from Jude Inc’s Faces of Neverwinter (the one that looks like a zombie) and make a copy of it and use as a female head too. I used @rjshae 's MDBConfig for this. I opened the mdb in that program and changed the packet name under P_HHM_Head215 to P_HTF_Head215, and then saved the whole thing as P_HTF_Head215. In the Toolset, when looking at a preview of the head on a character, the character becomes invisible. That tells me that something is very wrong. Maybe you can’t change a head like this from male to female? Is there something else I’m missing perhaps? Should I change the eyes too since they are male eyes? 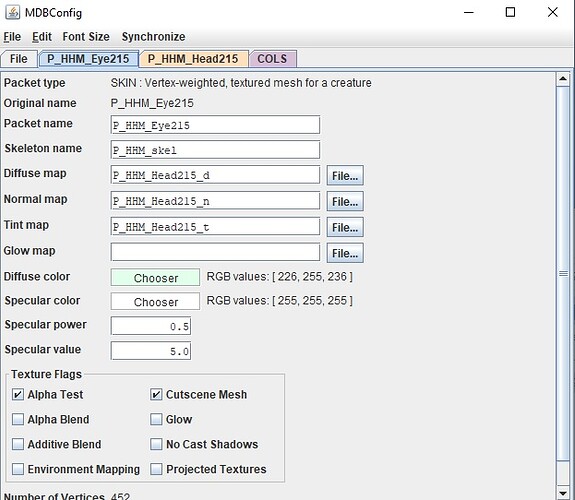 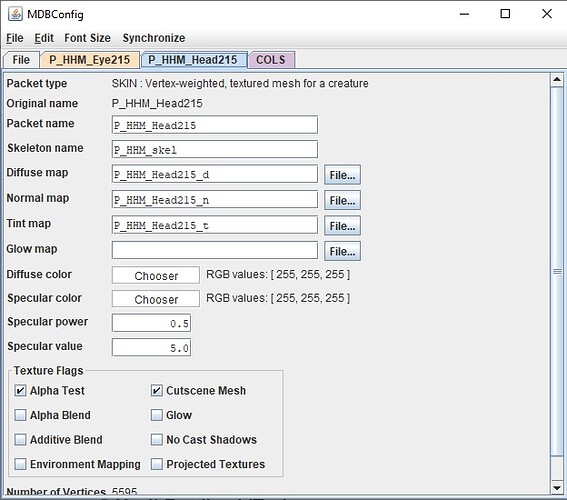 Maybe you can’t change a head like this from male to female?

Unfortunately, you can’t do it that way. You need to reskin the mesh with the new skeleton (look at the “Skeleton name” text box --> the engine expects a male skeleton, therefore won’t look for ??F models, hence the invisible character).

Shall I had the conversion from P_HHM_Head215 to P_HTF_Head_215 in the todo list?

Shall I had the conversion from P_HHM_Head215 to P_HTF_Head_215 in the todo list?

LOL. Here I am putting even more work on you.

It’s getting embarrassing. Of course that would be awesome if you could do that. It was just an idea I had for a story thing in ASW4. I’m not 100 % sure I will use it though. Will have to try it out, but I think I want to use it. So if this is too much work…Otherwise, don’t bother. It also has to do with how it actually looks ingame. If that head looks ridiculous with a female body and haircut, then I don’t know…

I will give a “special thanks” to you, 4760 if this module gets finished (which I really hope it will be). You’ve done SO much work for me this time around. I mean, you did a lot before, but on this module…jeez…Please say no if I’m putting to much work on you.

EDIT: By the way, I’m using the same head on an male elf, but that shouldn’t be a problem, right? I haven’t tried that out yet.

I’m using the same head on an male elf, but that shouldn’t be a problem, right?

No problem, you just need to clone it as P_EEM_Head215 (if it doesn’t exist already of course).

andgalf… I made a zombie female companion by getting a head and putting dark patches around her eyes ( with a faded alpha layer ) and blacking her lips etc. with paint net. Just open a head mdb of the one you want to use with the cloner, see what the main texture layer is, import that to paint net, draw/ paint on it it, save it as a new number, then clone the mdb as the new number with the new layer in it and leave the other layers alone.

It’s a bit of trial and error as it stretches when the skin goes on the skeleton but it does the job and after the first try you’ll see where it stretches. Then change the skin colour in the properties with the toolset and you have a zombie woman. I’ve never done anything like that before but it’s not so difficult and took me about an hour.

Thanks for the suggestion, Tsongo. In this case I wanted something a bit more extreme though, so I think I’ll wait for 4760 to fix that head first. If it doesn’t look good I’ll think about your suggestion here.

@everybody else, if I didn’t put a public link it’s not to keep HTF_head215 secret, it’s just because it’s still a WIP.