So NWN2 has a post like this, and I am really not sure about which direction I should go with on my next CC project for NWN. I posted something like this on the Beamdog forums last year, and it did not really get any replies. So getting to the point of this post, what kind of new content would people like to see for NWN in 2019- ?
Other than waiting for Beamdog to update every model and texture in NWN, which I am 99.999999% is not going to happen with the launch of the new renderer, or even in the next couple of years even.
Not to hate or anything, I get their reasons for not promising to deliver on that.
And another thing that is bothering me, What will happen to all of this content from over the years?
Until we get at least most of what is in the game updated, what we do make that is hi-poly-fancy mapped, will clash with everything. So what to do now?

Just to throw it out there, I have thought about doing something like d20 modern conversion, but with a twist, I was thinking about doing a old school retro conversion of nwn. The idea is that ALL of that old content could live on this way, because being low-poly and low-res would not matter, in fact, it would all fit it perfect. It would also set the bar really low for new content creators, which is a good thing I believe and it would help draw new people that like low-poly style games like Minecraft and such. Do not misunderstand me, I do not think NWN fits in the LOW-POLY style yet, things would need to be done, but the models could be used as a base.

Modules that put all the other great custom content to good use, for players to actually see and enjoy.

Things I still feel a lack of include ambient placeables and creatures. What I mean is, placeables that represent creatures. Examples include birds sitting on limbs, ruffling their wings, turning their heads, etc., fish jumping in ponds, creating ripples, frogs and turtles on logs or pond lilies, croaking and diving, wading birds or swimming lines of ducks on water areas, squirrels on the sides of trees, barking at the PC as they pass, then scurrying up the trunk to disappear, woodpeckers pecking at hollowed out trees.
That sort of thing.

More phenotypes or otherwise special animation sets, such as farmer (hoeing/raking, watering, milking [could use a placeable like a milking stool to trigger the pheno?], smith (hammering on anvil - not attacking it–, quenching in trough, barkeep (polishing mugs, filling mugs from tap, polishing table/bar), and other everyday motions too, like carrying things, pushing things, pulling things.

Personally, coming from Scotland, I’d like to see a Highland soldier from about the time of the Jacobite rebellions in full tartan kilted regalia ! 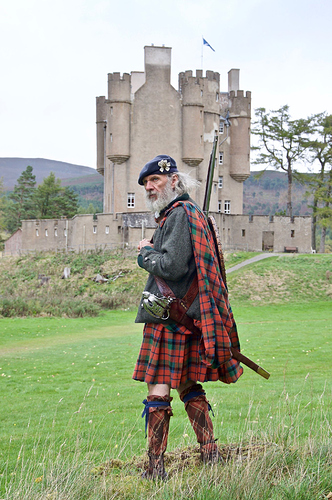 There is robe-based kilt armor appearance available over here for NWN1: https://neverwintervault.org/project/nwn1/hakpak/original-hakpak/eurgigas-robe-based-armors

That may be relevant for you.

Thanks. I’ll have a look.

That would be cool, alas, I have not learned anything about modeling/making new creatures yet.
I have been holding off on doing any new creature models until we see what beamdog will bring to the table, plus ossian studios are supposed to have all of the old models redone now. The same kind of go’s for tiles, I don’t want to redo a tileset and find out beamdog re-did the same one, only way better. Actually tiles are whole other ball game, we need a lot of them, and a it would take a team of real modders to get it done to modern standards and even then, it would take years I think.

There’s an Egyptian style kilt as a standalone download. For Scottish Tartan kilts you need to look at (the sorely missed IMO) Lisa. Look at the first illustrative image (4th row, 1st pair on the left) for Lisa’s Clothes Horse HotU Padded.

OK, I spent about half an hour on this - 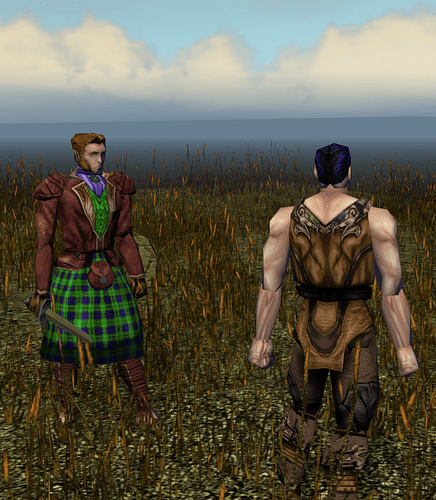 It was Lisa that did the hard bit. Hopefully that is about Jacobite in appearance. As I made that a custom clothing that entire outfit is wearable by a PC. The two colours of the tartan (i.e. plaid for those over the pond) are alterable too.

So (to keep this on topic) that is one less thing that is needed.

If it had the sash it would be perfect.
I have not tried to make armor or weapons yet, so maybe that might be a direction to face in, for the next project,hmm.

Thank you guys for replying,I was getting a bad creative block. The kind where you work on something for months, and then you start to have second thoughts about continuing doing something. I have really enjoyed the learning part of porting content and creating from scratch. But I just don’t know where NWNEE is going to go after the new renderer drops. If it is a success and it some how at some point brings a bunch of people back at some point,what then? Out with the old and in with the new? And what if it flops ,and beamdog says **** it and stops everything? A lot of it also has to do with me wanting to get into learning to code, and it is hard to make content and sit there and learn to program at the same time,you can’t. I worked on that barrel and had fun, but with that also came the knowledge that, it takes time,to make a high poly,turn it into a low poly, uv unwrap, bake a normal, export to substance, do texture work, and make the vfx, a lot of time. It became about progress, and being here now trying to figure out which way to progress to next. I have bought books about programming and modeling, download game engines, watched videos and reading stuff online about modeling and programming. I’m in it.

Ok sorry for that long post. Back to the OP topic. What does everyone think about a exclamation mark vfx for quest givers or whatever you might want to use it for? I was also thinking of a point of interest type of vfx like a flash/flickering light, like you would see in old resident evil games and such.

Just a heads up, I have been watching the vault custom content channel on discord, I saw that Toro is working on some animations. And also do you mean new animations for PCs that do all of those things or NPCs? One problem I remember people talking about with the pc animations is you can only have so many custom animations per pheno, and they said CEP already uses all of the slots.

… One problem I remember people talking about with the pc animations is you can only have so many custom animations per pheno, and they said CEP already uses all of the slots.

You can have up to 20 custom animations per phenotype.

CEP isn’t a problem because it uses custom phenotypes for its animations, leaving 20 slots free for builders in the Normal / Large phenotypes.

When you’ve used all 20 slots, you can add more custom lines to phenotype.2da. Each custom phenotype can have another 20 custom animations, so it’s not a major constraint.

The Custom Content Guide explains how to make models for new phenotypes and add animations.

What does everyone think about a exclamation mark vfx for quest givers or whatever you might want to use it for?

There are already a couple of those out there. This one has most of them. If it was something similar with musical notes then this ccc has some (by me and @TheBarbarian).

Nice, I don’t think I have ever seen those.

That looks great, Tarot. I agree with you about the quality of Lisa’s work.

@zordren3742, great to see you wanting to think about something new. I’m biased but when I came to NwN not so long ago and looked around it seemed to me that a lot of the material coming out was around NwN1 and NwN:EE in particular which is why I chose that for our current school project. Good luck and I’ll keep an eye out whichever way you go.

I actually did start to work on a remake of another d&d game, the barrel was one of the models that I needed for it. Just trying to get my feet wet without having to come up with a whole story by myself, but I was using project Q… A module I mean.

Oh I did not know all of that, I may have to start looking into all of that. I have not messed with phenos or armitures yet, so it might take some time to learn it all and get something going. I did start to mess with basic animations on the the Witcher 2 ports ,but that’s it so far.