U1 - U3, The Sinister Secret of Saltmarsh

Although I have built and created multiple adventures for the World of Greyhawk Action Server, this is my first attempt at creating a stand-alone module for the Community. It can be found here.. Cheers everyone!

Firstly, congratulations on what is clearly a major undertaking.

It might be useful to produce an installation guide. The module page links to multiple Required Projects. Many of those have umpteen links - it would be good to know exactly which one(s) to use. So far I guessed right for most of it, but who knew you’d be using the hak version of the CMP? Also, the module is looking for medieval.hak, but the most obvious link yields medievalcomp.hak and medievalrural.hak. I don’t have any more time right now to delve into that - more anon.

I wonder about the cep2_custom.hak, which has a huge amount of content that might impact other modules. Clearly, it’s possible to swap the default version out while playing your module, but you already have a considerable number of custom haks which could be used for that content.

You can just rename medievalcomp.hak to medieval.hak
It’s the same thing but module author should probably have used default name for the hack instead of renaming it.

Ah yes. It looks as if Zwerkules published a new version of his medieval hak about a month ago and gave it a different name. One should be able to rename it, or just use the May 2018 version which is the one I used to build when I started this project last year.

The cep2_custom is something I’ve been using server-side for years and never thought to change it. Most folks on the player end will have that hak from the cep, but it’s an empty shell so there is no harm in overwriting it (unless it’s already being used for something else, but even then it may cause conflicts). I have since renamed that hak and listed it separately. A new version of the module has been uploaded to correct a number of other issues. By the Gods, when you’re at this for so long you sometimes miss the most obvious things that are right in front of your face.

The module is still expecting medievalrural.hak which is not in the May 2018 version. I can work around that for now as I still have a copy of that hak somewhere.

On Android (and Linux IIRC?), upper case hak file names don’t work. I had to rename WoG_2das_Top.hak and wrm_SF10-senADDS.hak to their lower case equivalents. Using Windows Explorer on a PC with USB connection to the Android device, simply editing the hak file name in place doesn’t work - but editing the name in the Properties window does.

Module now loads on both PC and Android

The medieval.hak is the 2018 version. The medievalrural.hak (Mountains & More) is the 2017 version, which shows to be included in the Haks of Saltmarsh download. To be sure, I just downloaded it from the Vault site to be sure and it is listed in there. Was it not in your download? Here is a screenshot: 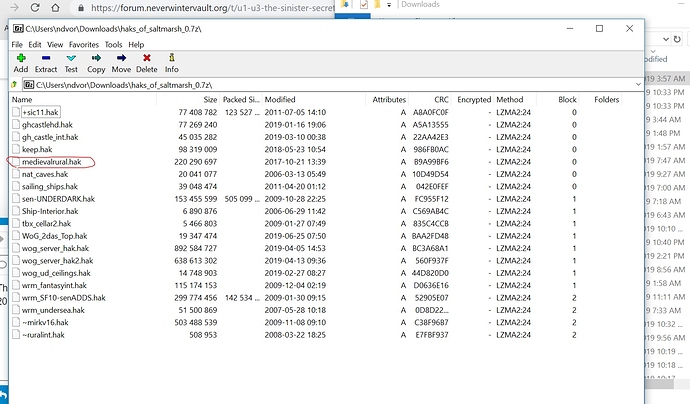 Do you have any suggestions on how to improve the way this is formatted for the end user/player?

My bad - medievalrural.hak is in the module haks, but I deleted it in the mistaken belief that it had come from the Medieval tileset download.