Ok…so I did ALL the right naming conventions for each portrait and coded right sexes and races…AND made it non-plot (0…not 1)…16 hours of work in total…all this work so I can upon building a character not have to see all the pictures of mixed races and sexes from my portraits folder.

I put the new portraits 2da in the override first…nothing

Why won’t the pictures separate into their respective sex and race?

What am I missing

Here is just a small portion of my 2da I copied to show you:

When I pasted the above segment from my notepad…it did not put the proper spacing between each…I wish I could upload my 2da here but I can’t…well maybe there is a way to do that but I don’t know how.

it did not put the proper spacing between each

I meant when I copied my 2da on here. I did a snipping tool clip…this is what it really looks like: 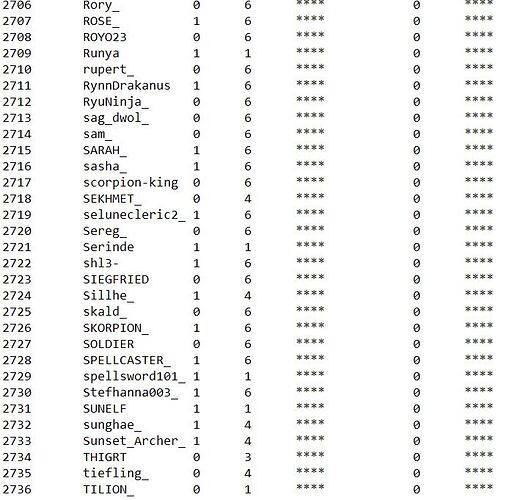 here’s what it looks like with the <pre> tag

anyway, enough meta. Maybe someone will chime in re. the real issue,

I guess you’re talking about character creation while starting a new game. Afaik, that has nothing to do with a *.2da. Instead, the filenames of the pictures in the “portrait”-subfolder should follow a naming convention.

I.e. “po_dw_f_99_h.tga” is the 99th female dwarf. If used in a 2da the same file (and the other four with lower resulution) would be refered as “dw_f_99_”. Adding things to the *.2da is only neccessary, if the portraits should be used within the toolset.

My approach would be to to rename all the files in the subfolder according to the convention.

Maybe I’m wrong, since I never payed much attention to this feature. But, how should it work for any user otherwise? Messing around with 2da is a developers issue, a normal user doesn’t even know that a 2da exists.

No thats wrong. The list of available portraits in character creation is not filtered by a naming convention. All the male portraits are there for any female char

Although I noticed, that the portraits are obviously sorted by filename. This could be quite helpful. But one should avoid the bioware naming convontion in this folder or start with a high number.

Using one of your lines as an example,

So the filename would be

This is first step. I also believe they should not exceed 16 characters, which includes the po_ and _ that follows for size variation.

This would then become po_PO_WIZARD_M_LC_H.tga (19 characters for the tga file).

I spent so many hours working on that stupid 2da only to see it all come to naught. I need to know for sure 100% that there is a way before tackling (spending more hours) this again.

I am willing to do that if it is possible. Anyone know? And thanks for at least replying

Thanks for the reply. There is already info like you said about the filing convention you mention above. I did many that way…but it did not sort by race or sex for character creation. I don’t care about the toolset filing system…I want this to work on character creation. Do you know how that would work. There seems to be no real information out there for “character creation” just toolset portrait listing.

Thanks for showing me how to post that …will use this for next time. Any suggestions on how to do this portrait stuff though?

Any suggestions on how to do this portrait stuff though?

nope sry. I just throw all portraits in /portraits and choose one (nwn2) while playing. Really not sure what Portraits.2da is used for… looks like some sort of default(s) for NPCs

Toolset and character creation are one of the same when it comes to portraits.

If you’re putting these in an override folder and the module you’re playing uses a hakpak with their own potraits.2da file in it, it will use that instead. So keep that in mind.

Naming convention is important, if you don’t do it correctly, it won’t appear.

Thanks for commenting. Glad to hear the portraits 2da is not only being used by the toolset but for our own personal portraits on creation. You know this for sure? That the pics are not just for toolset use?

If you look at my 2da snippets above you will see I use some “po_ xxxx_H” as an example that some say is the format…yet they do not filter by sex nor race still. Of course I have also seen in some articles in my search on this topic say you don’t need the “Po_” at the begining …that is only the naming convention for the pics to be used in the toolset for NPCs…not for the creation of a character. So I did a mix of both to see if either worked…nope.

I tried it with just the 2da in the override…nope

Everyone keeps mentioning this “naming convention”…I tried both types "po_ (name of pic) (each size of pic)…none seem to work…have you tried? Are your portraits working where they are filtered by race and sex on creation of a character? If so…show me your 2da.

There’s no doubt that the .tga files need names like po_foobar_h.tga and that the corresponding portraits.2da entry needs to be foobar_.

This works in all my module haks and allows filtering by race and gender in the toolset.

What I’m less certain about is whether the portraits.2da documentation is correct when it comes to character creation.

Suggestion - get it working in the toolset first, then see whether character creation works as advertised.

Could you do me a huge favour and show me an excerpt of your portrait 2da so I can see your naming convention that works. Not quite sure what you meant by the “foobar_”…unless you mean the name of the pic (TGA) has to match the line exactly…yeah I did that…for most…see above sample I posted…you would think that at least those I used that naming convention for would have filtered properly.

can I just throw the 2da in my override when it is done right?

EDIT: I just noticed that this naming convention is just for toolset…I’m not so concerned for the toolset as I am for the character creation.

Inorder to have portraits sorted by both race and sex, you need to name them as follows in the portraits.2da nad make sure the portrait names match this format as well:

An elven male EX: el_m_09_ Leave off the size (h,s,m,l) in the 2da entries as the game will select the correct size (if available) based upon the prefix.

The first two letters designate the race of the portrait. dw = dwarf, el = elf, gn = gnome, ha = halfling, hu = human, or = half orc. Half elves get both human and elven portraits to select from.

The third letter designates the sex of the portrait. m = male, f = female.

A custom portrait.2da should work as an override. Don’t forget to also add all of the portraits to your portrait folder as well.

Oh last bit too…since the Wemic and Brownie are in NWN:EE…what do you use for those?

Sorry … it’s been several years since I made my custom portraits. Yes, in order to select them as character pics, the TGAs must be prefixed with “po_” then the racial designation and the sex designation, then the order number or name for the pictures.

Are brownies and wemics in EE, or are you also using a version of CEP as well? If using CEP, then their race aditions are as follows: Dr = drider, Wm = wemic, Pl = plant and Br = brownie. If not using the CEP, then check the racialtype.2da for EE and see what abreviation is assigned.

Whew…glad you answered. I was preparing to change all my portrait names to this new naming convention. Yes NWN:EE has the wemic and brownie now in it.

Is anyone out there wiling to share a sample of their Portrait 2da that actual works on filtering the sex and race on “character creation”…I don’t care about the toolset application…I just want my portraits in my portrait folder to be filtered on creation…anyone got a working 2da that actually does this…I just need an actual sample YOU have to see…not from a website or the NWN wiki.