hey guys! just curious, a) are there any cool UI themes that you use or would recommend for nwn1? and b) any that work with the android version as well?

thanks a lot in advance!

I recommend Custom Menus (especially Woods). Haven’t tried it on Android, but it should work as it’s just a set of textures.

I use this and this and both are decent, although not perfect. Imo, the first, Yeneko’s, is better for font and font size and the second, more recent, has a pretty good colour scheme for menus etc. For me, though, they are both a big improvement on the default.

I keep wishing Beamdog would give the UI some attention ( as well as the look of the toolset). It couldn’t be hard, time consuming - or expensive- to have a look at the samples on here as a starting point or even buy one in.

thanks for the suggestions. i’d love to try the baldur’s gate GUI but it says to unpack the hak file and i don’t know how to do that. the hak file by itself makes no change to the ui. i’d like for a more old-school look and not necessarily “cleaner”. probably won’t use the reborn UI. also, the rest and attack button on mobile don’t change, nor do the icons for spellbook, char sheet, etc… none of those icons change on android. trying to figure things out but i’m at an impasse. any tips here?

can u tell me how to fix this so all icons are changed? 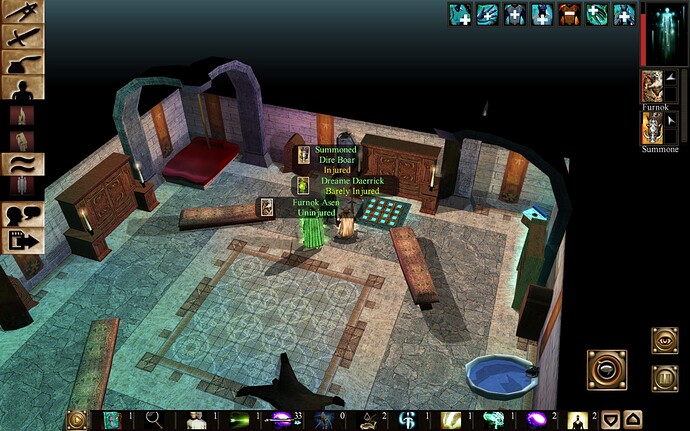 Sorry, no idea how mobiles might be different. The two I suggested work on both PC and Mac.

Unpacking the hak just means unzipping it so Winzip or any other decent program will do that for you. As far as I remember the instructions for the first suggestion allowed you to dump all the files into the override folder.

so my question would be, can someone look at the icons and tell me what i need to change in the file name to get them to be recognized? it’s probably a file name issue, right?

NWhak (which ships with the game) can be used to export all files from a hak into a folder.

The missing icons might be a case issue. NWN itself is tolerant of uppercase in file names when they are in a container such as hak or mod. However, file names in Android folders need to be changed to lower case in my experience.

edit - seems they already are lowercase. there’s got to be some slight error in the filename i believe. any idea what it could be?

someone has got to know how to fix this. can we at least identify the filenames of the icons that aren’t changed, and where they are located? then i could at least compare the names of the files to see if there is a difference.

edit - it looks like ir_inventory.tga is there for example, and seems to just not be working. could the mobile version have a different name for the inventory icon?

anyone know the mobile filenames? maybe the mod author?

Android is hard to investigate without a tool to examine the .bif files. If copied to an empty Windows folder, along with the .key, perhaps NWNExplorer could be used?

Lateral thoughts - have you tried converting .tga to .dds using NWN Crunch? Or applying the mod as a patch hak?

I’m doing everything on my tablet, so I can’t really use .exe files made for Windows. I would need someone who investigated it for me to let me know what the filenames are so I can change the ovr files .tga to the proper name to override the default icons. So hopefully someone will want to be helpful to me and do the hard work and then we can figure out how to mod those icons. I am sure it’s just a filename issue.