Hello, I thought i’d kick start the same topic from the old forums where I attempted to keep followers of the series and potential new players updated on it’s progress. I’m also very happy to receive feedback and suggestions as I muddle my way along.

I have been working on a trilogy of action adventure campaigns set in Middle Earth, but following an original plot and taking a few creative liberties along the way - because, damn, the lore really ties my hands!. I have already released two of these campaigns: “The Indanthrine Prince” (which is also available in NWN1 version!) and “The Umbral Abyss”. Both can be found here on the vault and Nexus Mods.There are also some fantastic Let’s Plays by AhTravesty on his YouTube channel.

I am now working on the 3rd and final part of the series which some of you may know as “Dead End”. I feel that this old title was somewhat prophetic, as the project has been delayed repeatedly! I struggled a lot with forming a story I was happy with, as well as the difficult job of creating an epic campaign that didn’t overpower the player - yep, the finale is for epic levels and I’m very conscious of turning the party into an unstoppable force - it’s very easy to do! I digress - the name may change!

It will be released in individual chapters, three in total. I would like to join them together, one by one, when all is said and done. This may help me with quality control and provide the community with some “stuff” more regularly.

The first chapter is around about halfway done. I have picked at it on and off over the last few months. Just recently the pace has been a lot more rapid, now that a number of obstacles have been overcome!

I will try and keep this topic updated with progress and fan-friendly tid-bits and I may also show off some stuff on YouTube. In the meantime, I have some images from my test runs I can share.

As it stands, I’m in the process of putting together a rather unconventional dungeon crawl and then I need to build up a couple more substantial areas to setup the final parts of the chapter. I mentioned before, this is an epic level campaign (you will start out at a maximum of level 20). I would welcome any wise words from those who have played/built epic level content; How did you keep the power of the party from getting out of hand? I can think of some very obvious solutions, but was there any finer controls in place that maybe I have overlooked?

Until next time. Do chime in 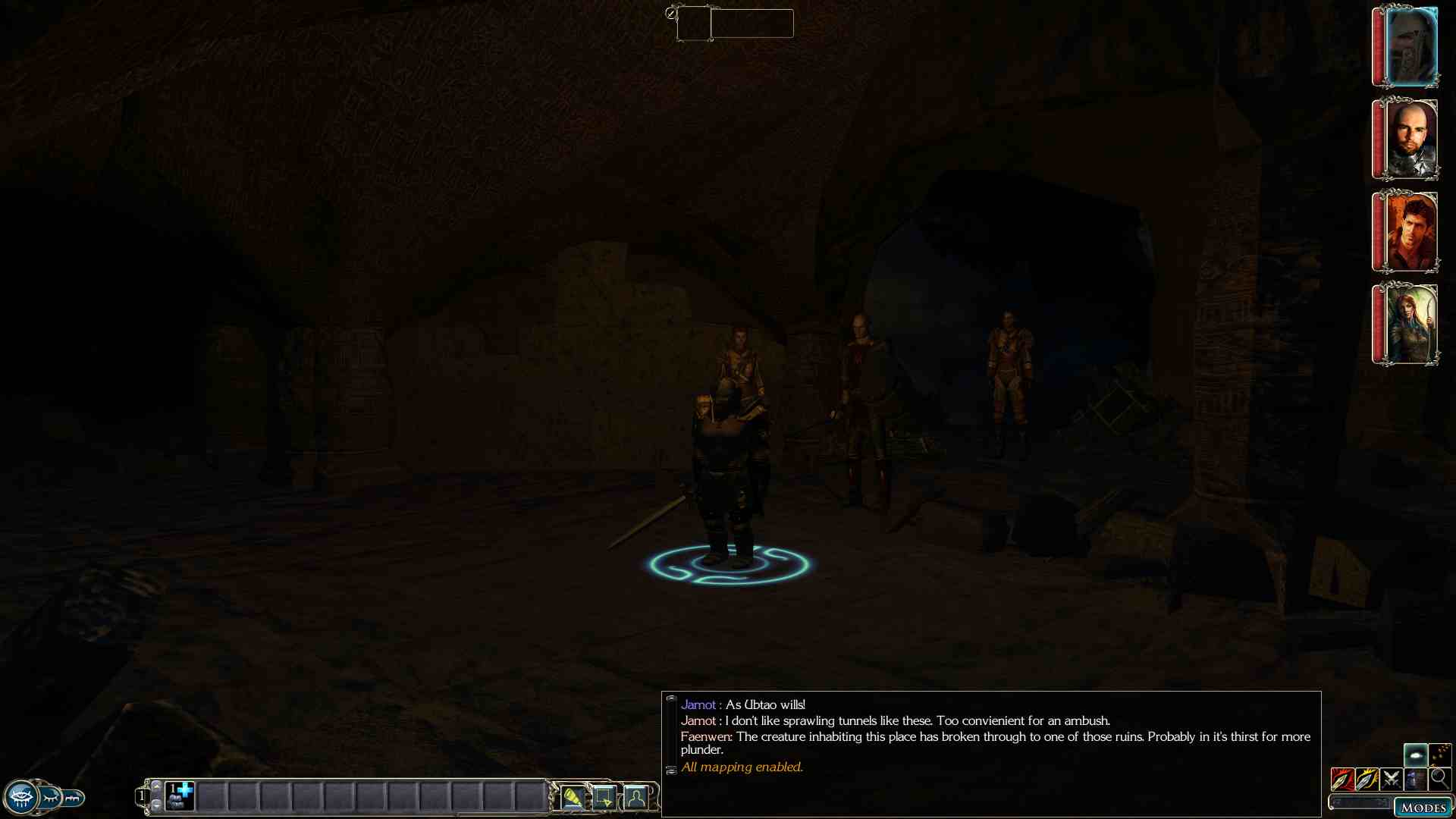 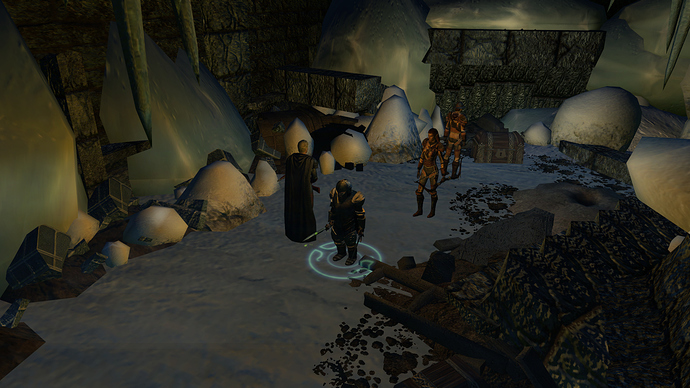 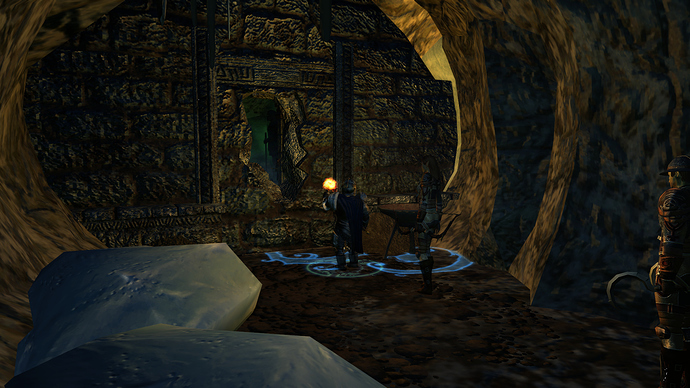 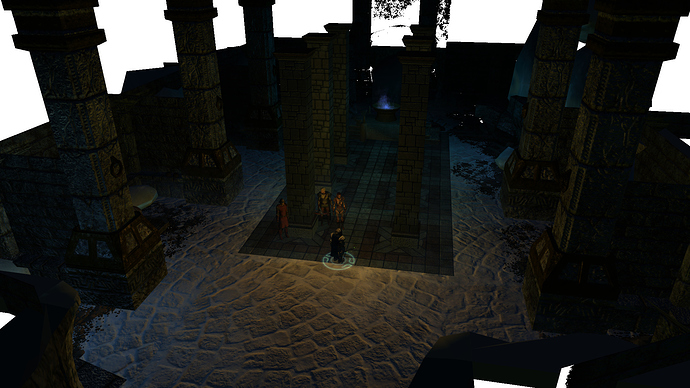 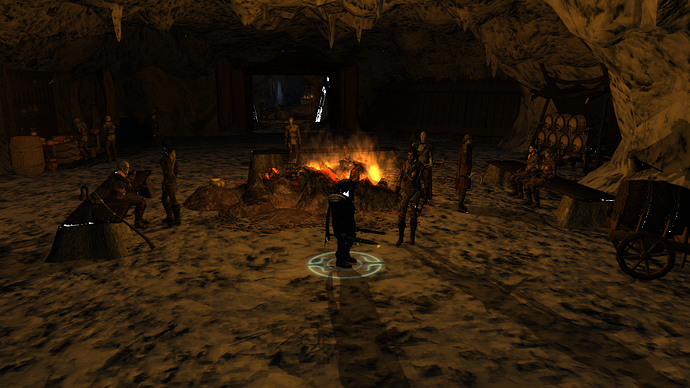 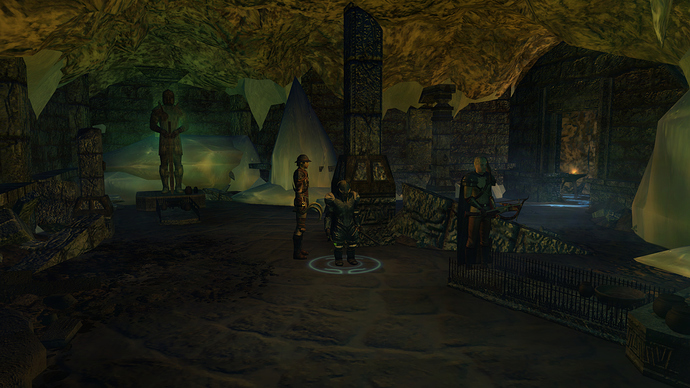 Don’t help anyone build a staff this time. It just ruins it for everyone.

I keep a copy of the ending of “The Umbral Abyss” hoping that someday the 3rd part comes at hand… you’ve just made my day! I remember that I played the two first masterpieces with a hobbit ranger focused in 2-handed fighting and relying in “weapon finesse”, wich made combats really hard at some points (too many monsters with damage reduction around made my main character almost useless)… I gave the two first chapters a 10!

Some of my favorite NWN2 material of all time, better than the official material IMHO.

Thanks George. I’ll try not to disappoint! There’s a few creatures with some high DR, usually the big nasty ones! I tend to play rogue/rangers too. My best way round these guys was to go for the sneak attack (if possible), tool up your frontline companions for damage, and/or keep a selection of weapons handy 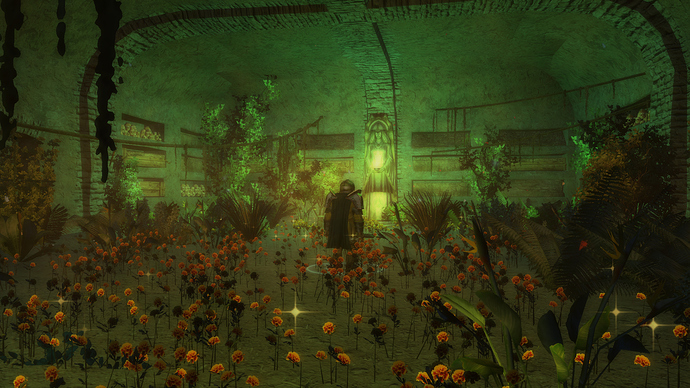 Clipboard01.jpg1920×1080 1.01 MB
Seeking the Tear of Yavanna, a unique artifact, touched by the hand of a godess. The Tear is said to possess unparalleled healing qualities, capable of bringing those certain of death back from the brink.
5 Likes
kamal August 24, 2018, 8:53pm #8

Placeables grass in an interior?

If only! A selection of low-level tree objects

We actually have grass placeables. Rjshae made them I think, and I made some that glow for Underdark use.

I may need to check that out then, thanks!

Just wrapped up a test run and there’s a lot more to play than I thought! I’ve completed the previously mentioned “unconventional” dungeon, aside from a few needed bits of polish. This was also my first attempt at something of a balance/challenge test, as this will be very important for this campaign.

Maybe I’m following something of a stereotype for epic campaigns, but there will be a significant item strip at the start of the campaign. It fits with the plot but is also probably the best way to get a handle on the party’s progression from the get-go. Of course, being an epic campaign, the (often better!) equipment streams out quite steadily! I’ll be sure to talk more about the start of the campaign and answer questions about it later.

Next up is probably the most significant part of the chapter. I’m going to be building a massive keep in an icy waste, which the party will be visiting - with a range of ways to enter it! I have been toying with how to build it and I think I’m settled on the castle and fortification placeables for the medieval city set. No snowy pieces, but hopefully tinting and area settings can help them blend in. I’m looking forward to this and may consider videoing some of the construction. Would anyone like that? Not done any NWN videos for a while!

Anyway, there’s my little update. Here are some shots of that play through. 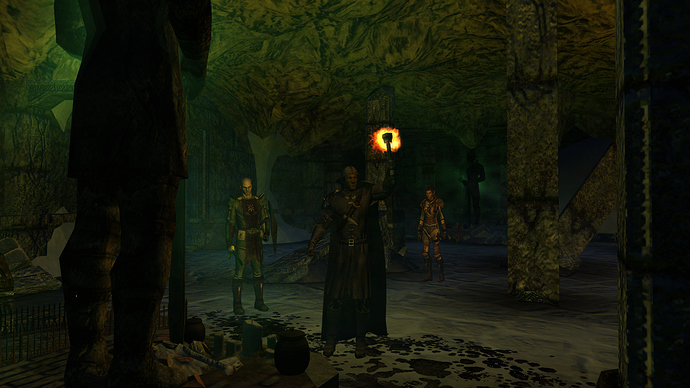 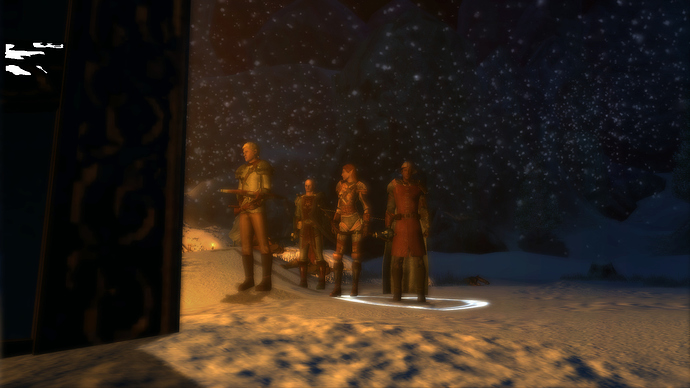 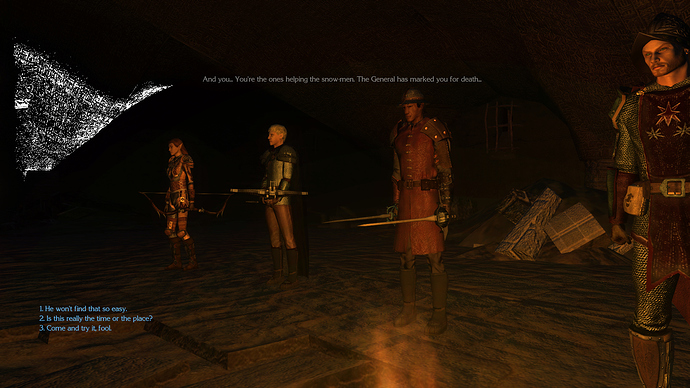 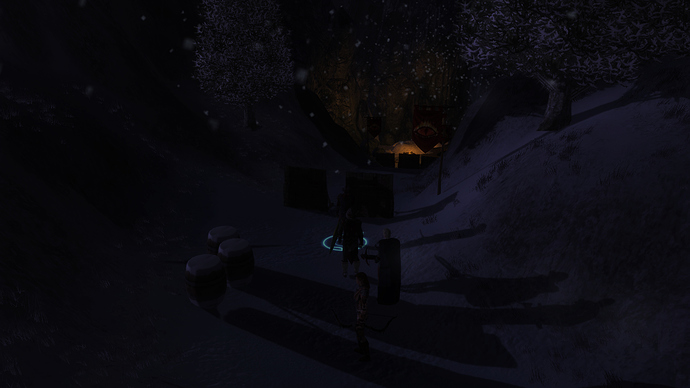 The last collection of areas are nearing completion. There was a lot of them!

I’ll put something more explanatory together soon, but here is a quick look at the waste area I built with a tease of the keep in the distance! There will be six levels to the keep, with each level built carefully to mimic the structure seen in the exterior. There is still another building to put together for the keep complex, some sort of dragon-pit! Might have a play with the shadow fortress KoS chamber for that…

The keep sits on a small island surrounded by a frozen sea. Shipwrecks litter the area and the docking areas stand idle amongst the shifting bergs. 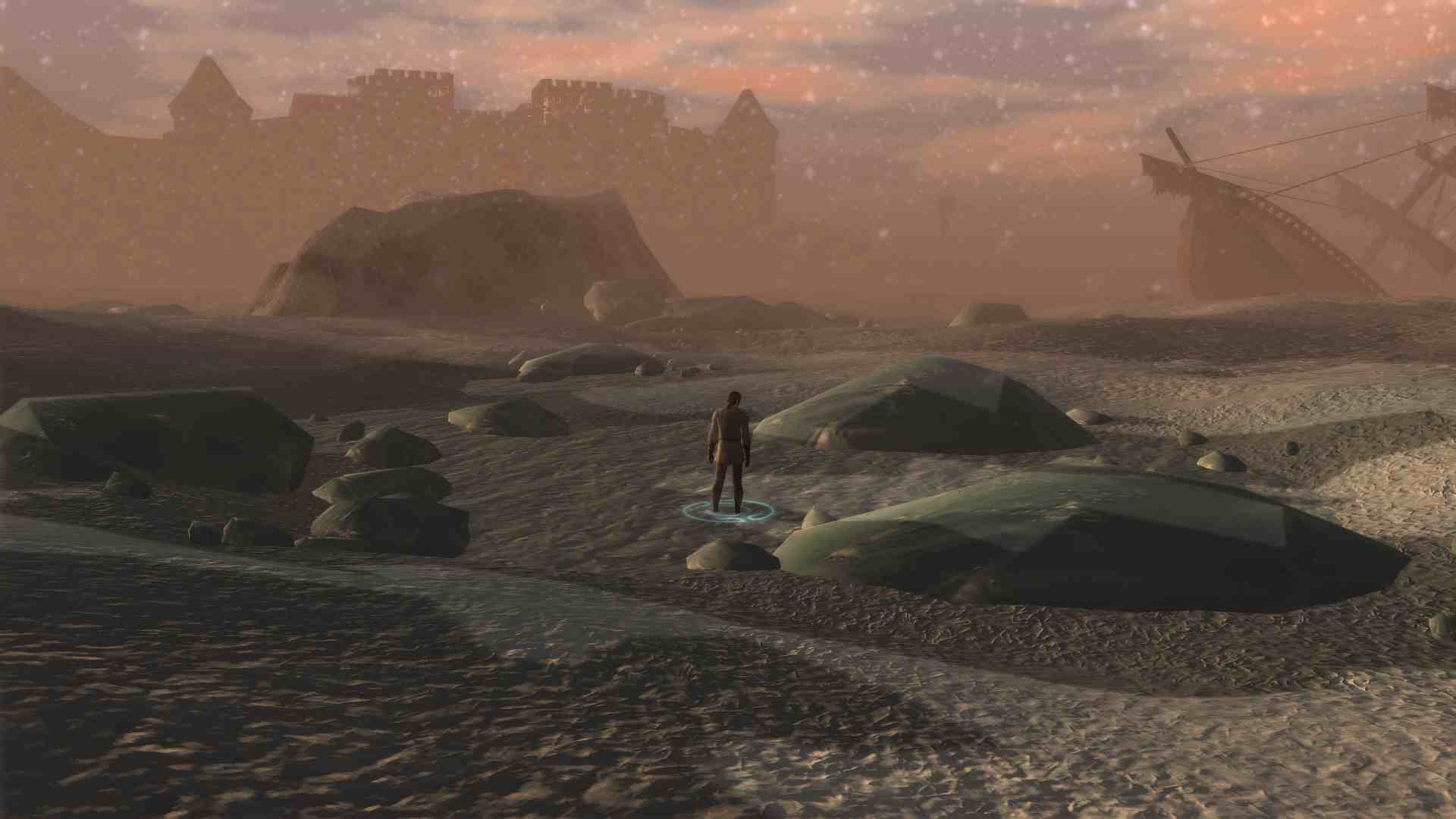 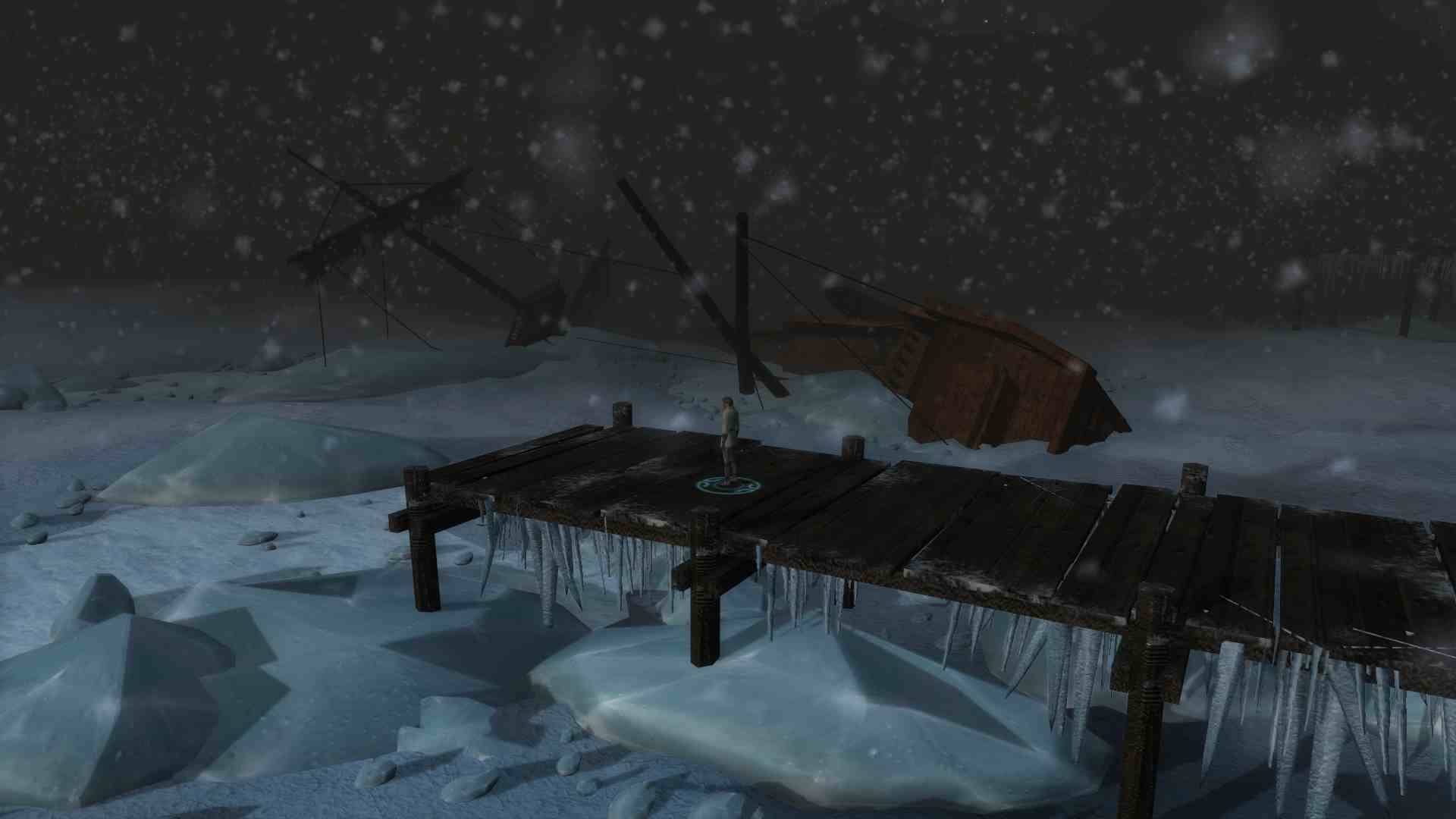 One could probably do some frozen corpses using characters with the right effects and tinting.

Reskinning some corpses with an ice texture would likely be pretty trivial.

Yes, the snow-corpses are getting a little overused! I will experiment and present the grim findings in my next post. Intending to use a few encounters with undead drowned corpses in this area (something of a convienient defense for the masters of that nearby fortress), so this would fit nicely with the theming!

@MERP_UK I’m ready to get to work

Thank you again for assisting me with this.

One of the fiddlier jobs will be changing IP (the U2 version) into a campaign (so it can more easily share resources introduced in UA and allow easier patching). I’ve got a copy going and will be looking into this whilst I start my playthrough and begin noting things to fix/change.

To enlighten readers; Work has restarted on the final campaign. I am also working on some significant updates to the previous 2 campaigns with help from @travus. Feel free to join in!