Vampires! (POLL: CAST YOUR VOTE: Which "Gaseous Form" Do You Prefer?) POLL CLOSED!

(Hopefully placed in the appropriate forum, as I talking about potential scripting requirements.)

It’s been some time since I played the OC, so I don’t recall how much has been implemented around vampires. A cursory glance at the creature in the toolset shows me some of its “qualities”, but I don’t see anything to do with turning into a gaseous form … which I thought I recalled from playing before … although that may have been from a different earlier game.

So, basically, my question is … in what ways do Vampires need “fixing” to come in line with what we expect them to play like?

As I say, at first glance, I think I may need to script gaseous from, but maybe others have already done this … or it is already in place and I am just missing it?

E.g. Has anybody already done some work in this area … in a mod or add-on?

EDIT: OK, on a second search I have found this. However, any feedback still welcome. NB: The video below does not use this, but uses my own scripting instead.

Whatever you do, make sure they don’t sparkle! 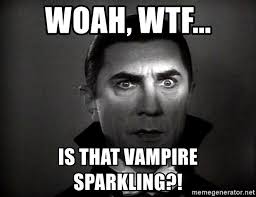 And remember (my favourite quote from it) -

To be honest, I am not a fan of the “Dracula” vampire. I find the character to have become a little tedious for me. In much the same way I am not a fan of Marvel Comic hero stuff. It all feels somewhat orchestrated and clichéd … following a formula so to speak.

Anyway, that’s just my opinion … and I will no likely be stuck a little inside those clichés myself if and when I manage to have the creature work as I hope … D&D style.

EDIT: And I have totally gone off the BBC even to the point where if I could get away with no TV licence, I would!

I have a gaseous form now … After some new scripting.

EDIT: Please go to the POLL in the lower post to cast your vote after viewing both videos. (Both videos are now available in the POLL POST below.) Thanks!

The battle is swift …

The NWN1 OC has an area with a bunch of coffins where the vampires turn to gas when they die, then flee to the coffin, and return a few rounds later. IIRC, you need a wooden stake to kill them while they are in the coffin.

The NWN1 OC has an area

I think that’s what I may be remembering in my own experience … Maybe I will try to dig that out and take a look … However, I am gradually making progress for a NWN2 version.

Yeah its pretty simple set of scripts: nw_c2_vampire7, nw_c2_vampireg9, nw_c2_vampiregd, and maybe one or two others (for the stake and the coffin maybe?). IIRC, they implemented the gaseous form as a creature vs. a VFX.

I may try taking a look then … although, they may be similar (same?) as were in that download I found. If they are, then they needed some work from my perspective … Also, see my video re VFX.

Whoa! There may be a use for this music in NWN2 now.

The gaseous form is impressive, however I am even more impressed with it retreating to the door, then going “poof” when it hits the door. That is some impressive scripting.

I tried changing the Gaseous form … Which version do you prefer? 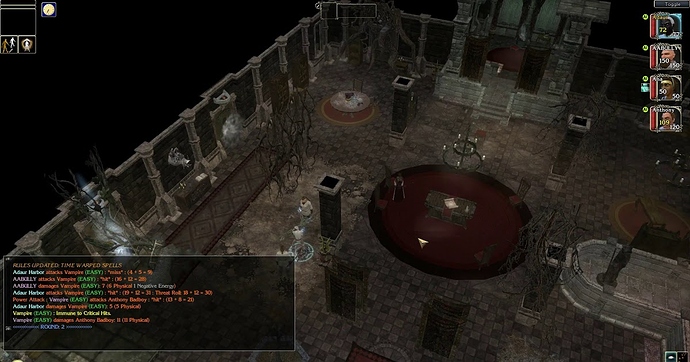 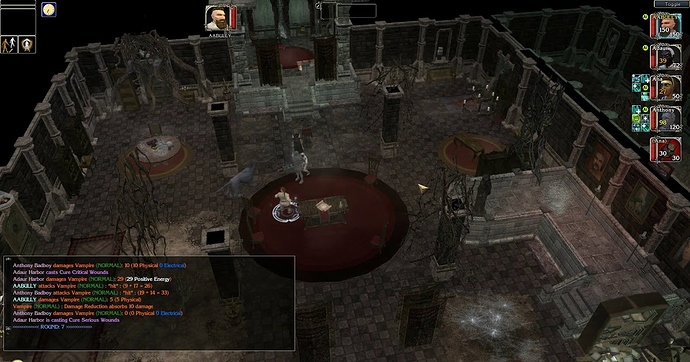 Please let me know which of the two versions you believe best fits the vampire Gaseous form:-

My wife and I are divided on which may be best suited.

I’m equally divided. I think either would be fine. Maybe use the first for the high level vampires and the other for minions? 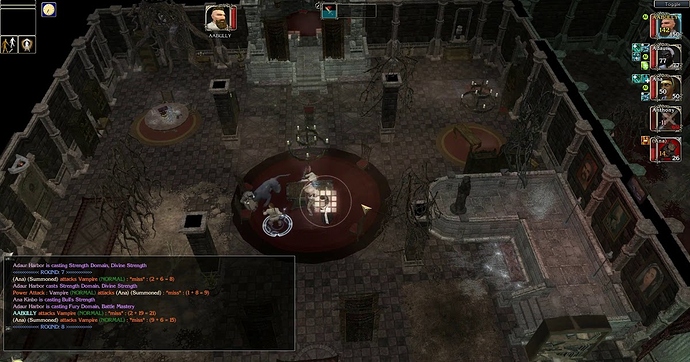 LATEST … IS ACTIONED … (AS CLOSE AS POSSIBLE)

Blood Drain: A vampire can suck blood from a living victim with its fangs by making a successful hit, dealing 1d4 points of Constitution drain. On each such successful attack, the vampire gains 5 temporary hit points.

Dominate: A vampire can crush an opponent’s will just by looking onto his or her eyes. This is a gaze attack as a standard action. Anyone the vampire targets must succeed on a Will Save or fall instantly under the vampire’s influence as though by a dominate person (or dazed). Spell (caster level 12th). The ability has a range of 30 feet.

Damage Reduction: A vampire has damage reduction10/ silver and magic.

Fast Healing: A vampire heals 5 points of damage each round so long as it has at least 1 hit point. If reduced to 0 hit points in combat, it automatically assumes gaseous form and attempts to escape. It must reach its coffin home within 2 hours or be utterly destroyed. (It can travel up to nine miles in 2 hours.) Any additional damage dealt to a vampire forced into gaseous form has no effect. Once at rest in its coffin, a vampire is helpless. It regains 1 hit point after 1 hour, then is no longer helpless and resumes healing at the rate of 5 hit points per round.

Gaseous Form: As a free action a vampire can assume gaseous form at will. (But will only use to escape in my modules.)

Resistances: A vampire has resistance to cold 10 and electricity 10.

A total of 135 views at the time of writing this post and only 7 votes. Please vote everyone

, @Lance_Botelle doesn’t ask for charity, he’s just asking for your preference on a visual effect.
Come on!
Have a great day to all and take care.

Damage Reduction: A vampire has damage reduction10/silver and magic.

Resistances: A vampire has resistance to cold 10 and electricity 10.

I believe it’s the Sunburst spell that not only heavily damages undead but also has a chance to kill vampires outright.