In the .mdl format, how do you stop a node from blocking line of sight without making it transparent? 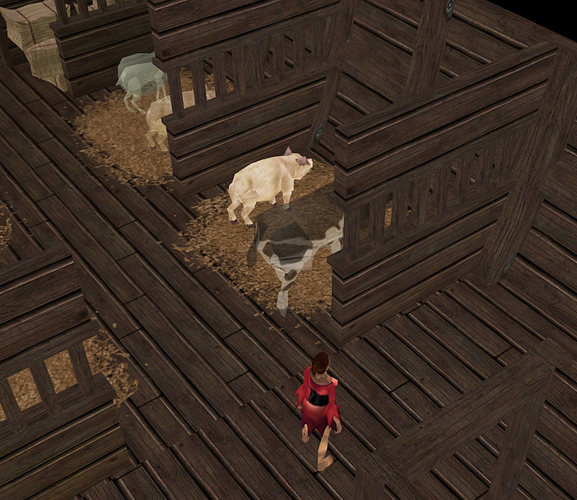 In this screenshot, from the Ship Interior tileset, the creatures in the tile next to the player are ghosting, as though they are “heard but not seen”.

Having failed to fix this by playing around with the Path Nodes (to which Visibility Nodes presumably default), I’ve concluded that the stub walls might be blocking line of sight, even though they have windows. Further evidence for this is that the player can see a creature from the adjacent tile if they move to a central point where their line of sight doesn’t pass through the stub wall - the pig in the screenshot is an example of this.

Unfortunately, the .mdl documentation I have is somewhat incomplete, so any help would be appreciated.

This should be determined by the surface materials in the walkmesh. I’d guess those faces were set to Obscuring (2?) instead of Nonwalk (7?).

No walk (7) is for flat surfaces. For a wall that you can look through the material is “Transparent” (8). It will no longer block sight.

Z to the rescue, I couldn’t remember for my life

@Zwerkules - thanks, that seems to be the answer, as all the vertical faces in the walkmesh are set to material 2 not 8. There are orientation errors, too.

In the end, I decided to live with it, as I discovered many more minor visibility glitches in the tileset that would take an age to fix. Maybe one day someone will find time to sort this out, as it’s a great community asset!