Sometimes, before entering a room which is not yet visible, it’s possible to see a light in there - in this example, from the window tile on the right: 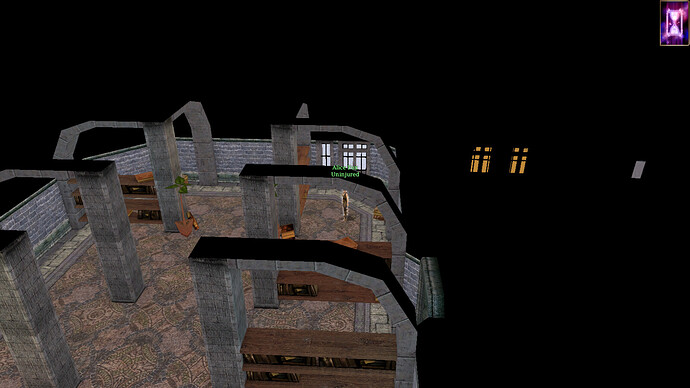 This happens even when all path / visibility nodes appear to be correct.

Not a big deal IMO - IIRC there are examples in the OC, too - but does anyone know how to fix it?

Have you tried looking at the advanced tab for the area properties? Check that the area is set to be indoors, artificial and above ground. Then, if your doors are shut, you shouldn’t get that.

Yeah I reported this to beamdog with lava in Dungeon tileset. It cannot be fixed by us, that needs to be done in render engine. Please report it to BeamDog again on their new bug tracker:

My original report was probably on the previous bug tracker they shut down or possibly directly communicated with Symphony or whoever was in charge of shaders. The more ppls complains the higher are chances for these (imo quite important as it is immersion breaking) issues to get fixed. If it is just me as always nothing will be done.

BTW and please report the black “fog” overlay too, I reported that 2 years ago and I still see it in newest EE. It is driving me crazy and I don’t understand how I am the only one seeing it. (shaders regression)

There are 4 possibilities of 2 caused by incorrect tileset data, 1 of incorrect area settings (exterior in interior) and what I wrote above.

From the image I believe it is that engine issue. I think it renders objects assigned to “a” dummy at the load of area and not on demand when the tile itself gets visible.

But I very often encounter in custom and even vanilla tilesets wrong visibility nodes that are then revealing tiles behind walls and gaps in polygons that then allows to see npcs and placeables behind walls. I ton of these bugfixes is in CPP and afaik it wasn’t inherited by NWN-EE yet despite I sent them the files and gave them permission (and honestly there is no copyright on bugfixes anyway).

All the settings and nodes appear to be correct, so it’s probably the engine bug.

Not sure what that means?

I see the black fog overlay issue too. I don’t have a reliable repro case for it. Do you have any advice to produce such? I went to file an issue last month and couldn’t repro it, though I have tons of screenshots of the problem in various tilesets, some custom, some not.

it is random, but once it happens it seems to stick, I actually found a conversation with Soren in my discord history, 2 years ago and he acknowledged the bug and is supposedly working on it

maybe someone needs to bump this

Did you file anything on the bd GitHub? I haven’t because I could not make a good repro case yet.

About 20 bugreports all still open or closed without being resolved. But not this one… Was solving it before they decided that old bugtracker is overfilled with unresolved bugreports and it is time to start over.