I encountered an issue while building my second module, which raised a concern about the GetObjectByTag function that I now bring to your attention. First I will give a brief overview and then a quick “flowchart” to see if it might affect you … Info believed to be correct at time of writing.

This is just a quick flowchart test to see if you need to take any action … It makes the assumption that you do have some usage of GetObjectByTag somewhere in your scripting.

A1: You will need to change the TAG of all destroyed items at time of removal. (Goto Q3.)
A2: You will need to inform (or force) your players to save and reload after importing any PCs. (Goto Q3.)
A3: You need to decide if GetObjectByTag is supposed to reference the item potentially here too. (END)
A4: You do not need to take any action at all. (END)
A5: Deal with imported PCs as mentioned. Unlikely any further action with other scripting required. (END)

As far as I know, everything reported here is true, but welcome feedback that may conform or deny these results.

My thanks goes to @kevL_s for his continued patience and help in tracking down these issues.

When are you calling GetObjectByTag()? DestroyObject() runs after the script ends.

The function is being called well after the the script that destroys the objects. You can even leave an area and the object remain “valid” as far as the function is concerned. A simple heart beat check for the TAG item shows it as valid throughout, until a save and reload.

Um, this is certainly interesting, but beyond the theoretical aspect, does this really have any practical relevance?

does this really have any practical relevance?

As I say in point B, maybe not as much for some people, but it may do for others.

It’s a case of being made aware of the potential issue as much as anything else. Personally, I’d rather play it safe and be sure items return as expected, even from the start. E.g. I had such an issue that highlighted the problem for me when sorting code for the lobby of module 2 of my campaign. I did work around the issue a different way to begin with, but then reconsidered it easier to push for a save and reload rather than risk a player leaving it for a while and me having to consider it again.

Bottom line, it is a “rare” problem, more likely to affect PCs being imported from module to module. It’s something I’d like to be made aware of in this case - and so thought others may like to know too.

Um, this is certainly interesting, but beyond the theoretical aspect, does this really have any practical relevance?

i agree. I’ve ‘known’ that GetObjectByTag() can fail unexpectedly for years – never had a clue why though. So i just don’t use it …

I now believe the fundamental reason is that it erroneously checks for tags of items on cached Encounter-creature objects/items.

(and yes it might be searching creature-objects etc. Not only items – it wasn’t ruled out) 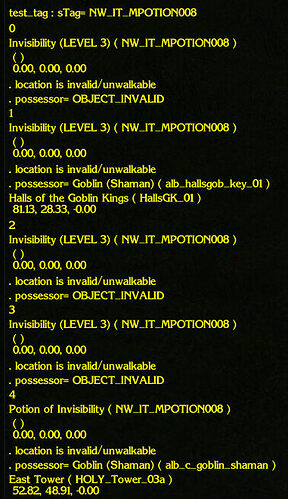 #0 #2 #3 potions are not genuinely extant in the module

one last thing is concerning. I hope Lance doesn’t mind me quoting his message here …

It is still required to change the TAG of an item if it is being stripped from a PC at the start, as it will still return a “VALID” object if GetObjectByTag is used again to search for such items before the player has saved and reloaded their game. NOTE: If all items are being removed (none left on the PC), then this simple TAG change is the easiest fix until the reload takes place - which can be left at the player’s discretion as opposed to “forced” when items are allowed to remain.

The “rogue” items on pending encounters remain such even after save and reloads.

This just has to be considered if we use the function to search for such tagged items in the module.

To complete what Lance says.

GetObjectByTag is a function I use really really a lot, it works perfectly, and always gives good result.

Sowhen everything appears to be right and it’s not working, it’s not at GetObjectByTag you need to look at, but at the object.

First problem is what Lance is saying: The object doesn’t exist anymore, if it doesn t exit anymore you can’ t access it, be sure it’s here.

Second common problem : Several object with the same tag exist, GetObjectByTag will give you the first one created unless if you give it the number of object created you wish. It can be tricky, and I don’t remember if the first is referenced at 0 or 1 be carefull to test it if you use it.

So if you don’t get the object you wished perhaps it’s beceause you have several object with the same tag, and the one returned isn’ t the one with the right index. I think I got that way of doing thing works correctly only once, I didn’t master the index made by the game, things are eluding me in its creation by the game. So for those case I prefer to use the GetNearestObjectByTag function to be sure to get the one I get by using a nearby Object of the Object I want.

Third case I encountered where it did’nt work:
The vicious case. IF it doesn’t work it’s not the function, it’s the TAG ! Some object loose their tags after a SAVE and LOAD. I save the game, close the game, Load again where I was, and a magic NWN2 bugs commes, somme type of objects have lost their tags. All their tags have becomme blank. One of the object I nailed with this problem are lights. All lights type object loose their tag when you load from a save, but upon the cration of the area the first time before a save the tag is correctly in game.

In order to access them I use SetLocalObject and GetLocalObject. Save your object with the Set and get it after with the Get one. This way still work after a load from a save, it’s more work and require more attention to set up, I only use it for type of object with tag issue on Save/load operation I nailed.

I haven’t read the whole discussion, because I don’t understand everything in another language.
But…
Items tend to be almost always 99% in the inventory of a creature or a placeable, so I would NEVER use GetoObjectByTag (), but a loop of GetFirstItemInInventory () or even better GetItemPossessedBy ().