I’ve encountered a weird area bug in the module I’m working on right now. I don’t understand why and how it appeared since it hasn’t been there before.

When I enter this area, an indoor area, and I try to click to move the PC instead of being able to click on the ground some distance away the “talk icon” appears so that I can’t move there. At first I thought it had to do with a walkmesh problem, but when I look in the toolset I can’t see anything wrong. It looks just as normal that you can walk everywhere. The one thing I can think of that I’ve remade since testing this is oustide of this building I have script that looks like this (removed it because that wasn’t the problem).

It’s a conversation trigger that I had to change because the companion that’s traveling with you tend to get stuck, and therefore I teleport her to the PC. Still, after that conversation I can move the PC like normal and everything seems fine. It’s just when I enter this indood area that problems appear. I know I have modified one of the triggers in this indoor area, but when the PC enters that trigger is a bit far away. Actually it is where you try to move your character. Part of the area where you enter looks like this: 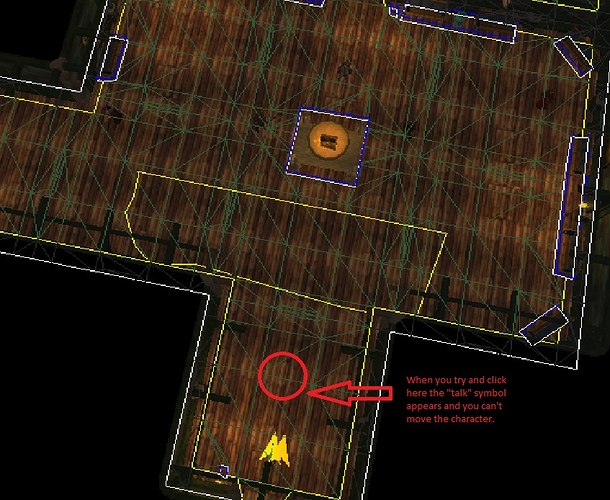 Ok, I removed the script I posted here entirely but the problem still exists so the script apparently had nothing to do with it.

Edit: I can still move the character with the arrow keys but the icon is wrong and you can’t click. I tried going back to one of my earlier saves of the module foler from almost two months ago and copied the area files from that to my newest folder but the problem still persists. Maybe my whole latest module folder has gotten corrupt somehow.

Looking at it more, it is as if the game highlights one of the characters in the indoor area even though I haven’t clicked on that one. In some instances if I move the camera around enough you can sometimes click on the floor instead, so I can obviously walk where I am supposed to walk. This is so odd.

Edit: If one turns the camera around completely so that the character the game highlights isn’t in view at all you can click on the floor instead. What is this weird behaviour?

Edit: I think I have found the problem! It has to do with a character and a new head of that character that 4670 did for me. When looking at it in the toolset the character is totally huge when it comes to the green box around it. Will contact him and see if we can solve this. 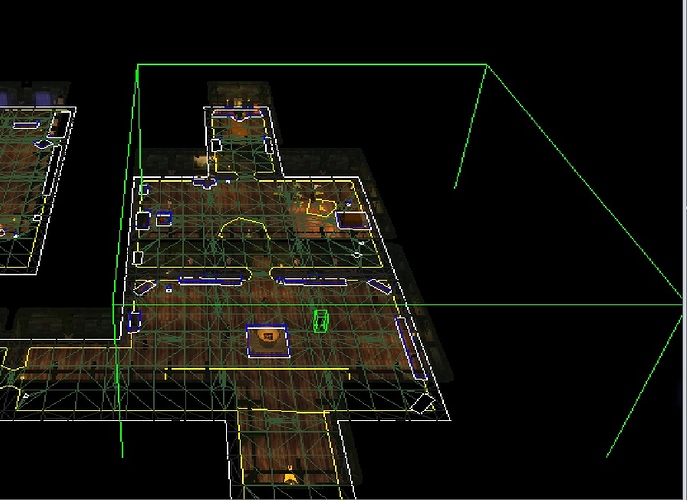 Yes, for some reason the collision sphere for the new head was 100 times bigger than it was supposed to be!

for some reason the collision sphere for the new head was 100 times bigger than it was supposed to be!