Hey, so I am still new to this whole nwn2 toolset debugging but I can’t wrap my head around this. 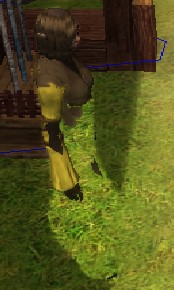 WHY IN THE NINE HELLS OF BATOR DOES THIS HAPPEN!? Like seriously the original one is like this:

And the neat part is, there seems to be no problem, everything checks out and I am confused. This used to be a male NPC posing as a merchant (not a functional one just named merchant) and this kept happening. It happens randomly at a specific location and is only visible at certain angles. Is there a fix for this? Has this occurred before? I am playing nwn2 disk version MOTB 1.22.1588 English.
-Manvar-

No idea why it’s done this and I’ve never seen it before but maybe the npc needs to be a specific class to wear that outfit or it’s some sort of custom content with a bit missing.

What I do with npc’s that don’t need to be "wearing " anything for fighting etc. is…

Go to the npc’s properties and in the armor set tab ( last one on right ) set up what you want them to wear. Then go to the properties tab ( first one on left ) and select never show armour and change the colour of the armour to what you want.

That way you don’t have to mess about with the inventory and class etc. doesn’t matter. You can also spin the npc in the armour set tab by clicking the picture and using ctrl and right mouse button and might be able to see if something’s missing like that.

No no no that’s the weird part! The NPC isn’t wearing armour, it’s a commoner (literally the blueprint n_commoner) without anything on the inventory. The only thing I’ve done to the original is gender-swap it and edit the name and description. This weird model appears inside the NPC but it is its own separate thing (it doesn’t change no matter what I do). But in the end, who cares it isn’t game-breaking and so we don’t have a problem I guess. Although if anyone knows why this happens or has any ideas be sure to leave them down below.
-Manvar-

Have you got two of them in exactly the same place by double clicking it by accident ?

No, i don’t. I am out of solutions to be honest.
-Manvar-

Time to hit delete and make a new npc perhaps ?

This looks kind of like a thing that happened to me. My guess is that something is weird with the outfit, maybe the outfit was only made for one gender and now that you swapped it, it became weird? Does it look like this if you change it to a male?
Come to think of it, that with it disappearing at certain angles happened to me when I had placed a character somewhere in the area that became corrupt in some way. Try and go through your characters in the area, and if you happen on someone that is invicible, then that’s the culprit. Erase that one in that case, because else you will have bugs aplenty, I’m afraid.

@andgalf So, like erase the area? Or erase the NPC?
-Manvar-

Also the NPC was initialy a male which I gender-swapped and it doesn’t have any outfit. Though I believe I may have made it a plot npc accidentaly. I ain’t sure. Good night, see you on the morrow and I hope you can help me.
-Manvar-

I meant, erase the NPC that is invicible (sorry, I made a typo, corrected that), in that case. If you don’t have any invicible NPCs there in the area, then you don’t have the same problem I had.

Maybe try change the outfit on the NPC that was initialy male under Armor Set and see what happens. Also, try and change the head (face). Yeah, it’s late here too, I need to go to bed. I won’t be around until the evening tomorrow, but I hope everything works out for you.

Thanks lad, gonna try it and ask if I have further questions.
-Manvar-

SOLUTION FOUND!
What worked for me was actually quite simple. I remembered that the NPCs were commoners with their appearances altered. So I deleted every single problematic NPC and made custom blueprints which I then placed around my module. Bit painfull but it works.
-Manvar-

Hmmm, so we still don’t know what caused the problem then.

Well, I’m glad you found a solution at least.

@andgalf No, we actually do. Basically, the problem was that I had placed down the commoners’ existing blueprint and edited them with custom hair, faces, etc., so they messed up the whole thing.

Basically, the problem was that I had placed down the commoners’ existing blueprint and edited them with custom hair, faces, etc., so they messed up the whole thing.

But should be able to do that. I do that all the time. That’s what I meant.

@andgalf I used custom face and hair models. I wasn’t just changing the head from 1 to 6, I was using the Faces Of Neverwinter mod.
-Manvar-

@manvar07299 - But I use those all the time too. I don’t think those should cause problems like these. At least I’ve never had those weird “invisible” problems (other than what I mentioned in previous posts here), but I don’t know…maybe you’re right.

just guessing but iirc that partial invis could happen when the engine tries to draw 2 creatures at the same location, and/or one of them might have been borked in some way …