I get this in the Char Creation/Level Up menu and again in the Spell Selection menus. The graphic is present and I can make a selection but there is no text explaining what it is.
This shot is from Bauldur’s Gate Reloaded but it’s happened in other mods with a lot of custom content. 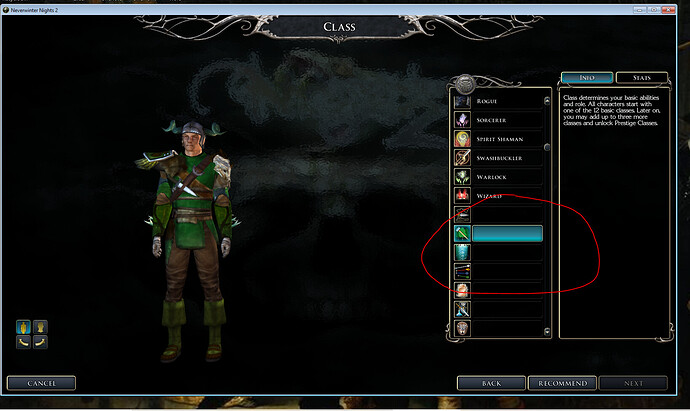 not sure about specifics though. Try doing a hardrive search for *.tlk, just to see what you’ve got there

It can also relate to text being too long/big/incorrect size for the box.

What is the text supposed to say?

@kevL_s @GCoyote This is exactly what I think (Dialog.Tlk). It also happened to me when trying to manually change the game from English to French.

Well that was a good part of it. There were Kaedrin’s files for compatibility in the campaign folder but I don’t have Kaedrin’s installed.

Do the the dlg files interact with the tlk files?

@GCoyote
This can be the case if you have to use the “Language files for Kaedrin PrC pack”. It must be updated SoZ/1.23 version. Look in the dialog files in your “My Documents\Neverwinter Nights 2” folder.

Kaedrin’s files were definitely part of the problem. I have not cleaned my set up since I got this PC so I’m going to reinstall and see what happens.

GUI Text boxes are a certain size and normally accept certain size strings. If a text string is too long, it may try to wrap and then you may see nothing. So any text string, from anywhere, inc dialog.tlk, can cause this issue, and especially if other GUI aspects have been altered, like font size.

The example I give above is the exact same text being sent to the same GUI where the font size had been altered, which made the box not fill correctly … and appear empty.

@Lance_Botelle If I understood correctly @kevL_s , he used the Kaedrin Language pack.
I don’t know if it was for the French language (my native language), but if so, it often uses longer formulations and its might exceed the GUI dialogue box.

I don’t know if it was for the French language (my native language), but if so, it often uses longer formulations and its might exceed the GUI dialogue box.

Exactly … So, it could be the problem … we’ll have to wait and see if @GCoyote gets to the bottom of it.

It was definitely conflicting .tlk files. Almost all of the blank entries were for Kaedrin’s PrC classes that I don’t have installed and don’t play. Deleting those folders cleared out +90% of the problem. BGR comes with two more .tlk files that look very similar to files I already had but don’t recall where they came from. I still have a few blank entries for additional races that I’m trying to track down but to do that in a reasonable amount of time I’m doing a clean install first.

Consider this one “solved” for now.
Thanks everyone!