Why adventurers get paid to kill rats!

Look at a rat blueprint, it’s a level 1 animal class, it’s strength is 2 giving it a -4 attack but because it’s such a lethal creature it’s attack bonus is 4.

Now go and level up the rat, make it level 2, reset the package and it’s attack bonus is -3 ! So the rat got tougher but became more useless ?

How do rats do it ? I’ve checked it’s feats, inventory etc, but can’t see how it gets this attack bonus. Why when it goes up a level with all the same stats does it’s attack go down ?

Does this mean that there is a way to make creatures better at attacking without better weapons and feats but still keep them at low level ? If so how do you do it because my zombies are level 10 fighters now so they can hit the PC ?

Those level 1 rat blueprints probably have custom stats, when they level up everything is recalculated.
Level 1 rats shouldn’t have 4 AB, not even if they have weapon finesse…

A standard lvl1 rat has the Weapon Finesse feat, meaning it’ll use its DEX modifier for attack rolls. A standard rat has a DEX of 15 (+2 modifier) and a STR of 2 (-4 modifier). Rats also have a +2 attack bonus due to their tiny size. So, its total attack bonus is indeed +4. Although it’ll only ever do 1 point of damage due to its low strength.
If you click the “reset from package” button for that same rat, it’ll change all of it’s feats to the generic “animal” package. i.e. It’ll lose the Weapon Finesse feat and gain the Dodge and Toughness feats. So, because it no longer has Weapon Finesse, it now has to use it’s STR modifier for attack rolls (-4).
Bottom line, most creatures are custom, so resetting them to a generic creature/animal package could make them very different from original. It’s probably best to manually level them up and save it as a new blueprint.

wow who knew rats are so interesting …

now i want to make a mod with all rats. Big rats, small rats, giant rats …

Thanks everybody… It seems that the humble young rat has finesse, but the older more experienced one has none !

kevL_s… You could also use your awesome three part multi spawn script and make the tavern cellar from hell.

You could also use your awesome three part multi spawn script and make the tavern cellar from hell. 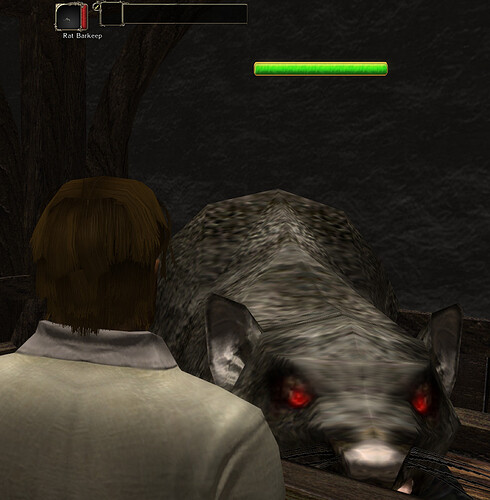 With rats that big… Just how big are the cats “that ate the rats” (felis domesticus humongous)?

You have no idea …
https://neverwintervault.org/project/nwn2/module/elemental-plane-rats

They can mess with your mind (NwN link) - Rainbow Rats V 2.0 - (These glow in the dark too with PBR glow map in EE version).

kevL_s… Watch out you’ve got competition for your rat world now !

Those Rainbow Rats for NwN 1 were partly inspired by the wizard/narrator of FR5: The Savage North sourcebook for 1e AD&D by Paul Jaquays. Amelior Amanitas, wizard/sage/alchemist of Secomber, amongst other things kept a dozen cats in a variety of brilliant colours (red, green, fuchsia, flame-orange, mint blue, sun yellow,and so on). Also there is a short description of him in the boxed set campaign expansion for the first ed forgotten realms, “The North”. More info on Amelior Amanitas at the Forgotten Realms wiki.

This shows up and goes “Be not afraid”

But seriously in the mod I’m making the party’s already past the place where I could’ve put them and my hak is getting too big now.