Has anyone had any issues with EE using Windows 11, Toolset, playing, or otherwise? Interested to see what the consensus is.

Works great for me.

The only issue I had with Windows 11 is that it took a lot of trial and error to get the game to start the first time. It kept picking weird resolutions, and it would take 5 minutes or more to load the game. Finally I managed to get it to my native resolution and after that it’s worked perfectly.

Did you update from Win 10 or was it a new Win 11 install? I ask because I experienced no issues with anything and my Win11 was an update from Win10.

Won’t be getting Win 11 until I’m forced to. Am uncertain about compatibility of my older Win3.11-WinXP titles. May need a dual or triple boot system. I already have a22 yo XP system for titles that simply won’t wear anything above XP.

I’ve a 43" screen, so I’d like to go beyond the current highest stock resolution if possible - I recall a 'tube video of a man that managed to scale up NWNEE to 4K just for the lols.

Bit late to the party here,

Been using Win 11 since the release date, and it has been working the same as Win 10 as expected, since it’s built on the same cores, and Win 11 is pretty much just a huge visual improvement and security aswell.

But never had any issues with Win 11 in any software, be it toolset, NWN game itself, other games or applications/software.

Not particularly a Microsoft fanboy, but I can’t really help but recommend Win 11, for the the sheer good visuals, security, and of course now it has multi-tabs in File Explorer, making custom content in NWN even smoother and easier

Been through all windows consumer versions since Win 95, (exception of ME and 2000) and this one is by far the best one they’ve ever done, even outdoing 10, 7 and XP.

I’ve been playing NWN EE in 4K resolution for a while now, under macOS. Runs great!

I’m curious as I also play on a Mac. How do I get 4K resolution? In fact, what is 4K resolution? My iMac is set to just the default for the display. Game says it’s 224 X 1260 but there are no other options in the Options/Res/UI settings.

Also, if you’re using Apple M1 or M2 series you need to Run the game via another file directly instead of through Steam for example, unless that has changed. I get mine at:
/Users/MYNAME/Library/Application Support/Steam/steamapps/common/Neverwinter Nights/bin/macOS/nwmain.app
I just keep an Alias on my desktop to run it easily. 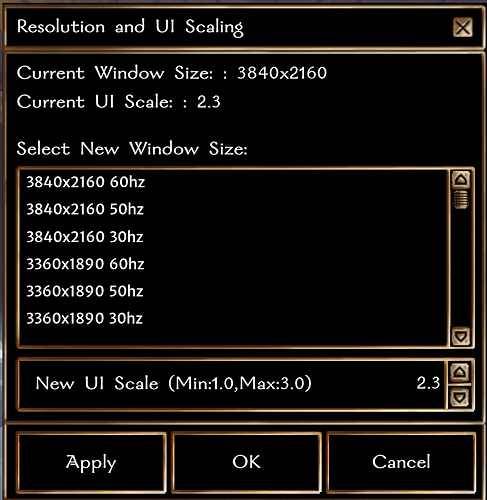 Thanks. Will check that.

In your macOS screen options, do you get a list of resolutions to chose from or only like icons to chose? If icons, right-click on one and select Show List instead, to see all resolution options.

Yup, that did the trick. Not sure I’ll be able to see hostiles in NWN at this size but gonna give it a whirl.

" * Mac: Provided universal binary with a build for Apple M1. If you are on M1 and on Steam, you will have to launch the game directly, NOT via Steam, for the binary to run natively. Otherwise, it will run via Rosetta."

Yeah, that’s what I’ve done. Threw up a slight issue in that most of my saved games didn’t appear as available for loading whereas if I go back and load the original ( rosetta?) version they are available under the curation tab “local”. Not a problem but obviously something has moved something (without wishing to get too technical ! )

Have to say I don’t see much of a difference between that and the previous resolution. Should I ?