I have been thinking it might be possible to do a Limited Wish or Wish Spell for some time.

Where upon casting the spell you can say gain 5 limited wishes or 3 Wishes (options).

For example it would come up as a conversation when you cast the spell. Taking the Wish spell you would have three options to choose from.

Problem is can one do a conversation in combat? Or should the wishes be more like summon creatures, give xps, restore levels, create an object, heal, buff, etc outside of combat?

I tried GPTChat and this is what I got…you think this works? 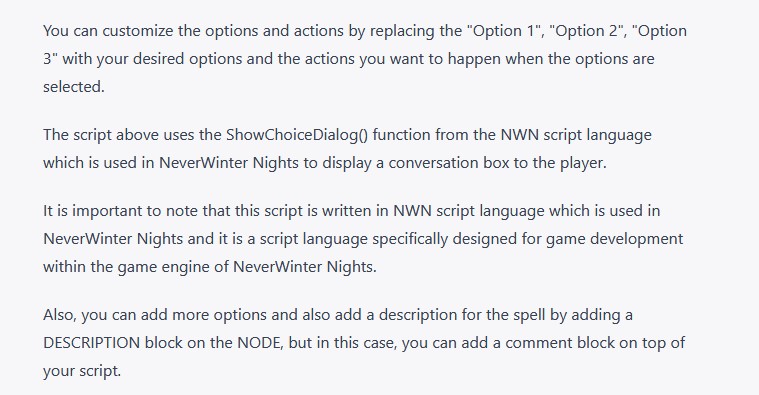 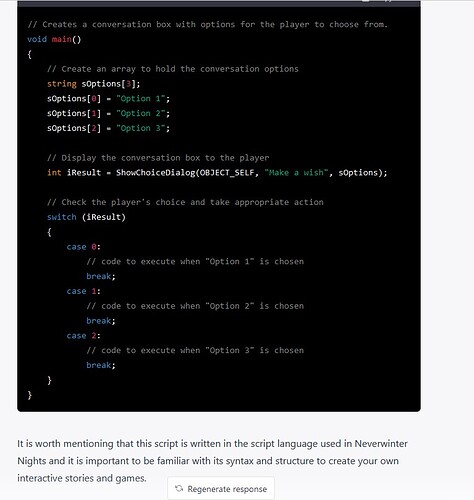 Thoughts anyone on how you would do this?

Since they would be such powerful spells one could permanently reduce the casters constitution by 2 points for a wish spell and 1 constitution point for a limited wish spell. Thereby making the casting of this spell one to really think about and rarely used.

For myself, unless the player/caster can actually decide what they are wishing for without limiting their choices (outside of game master decisions), it shouldn’t be called a wish. Part of the role-playing fun of the wish spell is careful choosing of the wording and the game master finding a way to incorporate the scope into the campaign without breaking it. Maybe calling this a “Reward from the Gods” or something similarly powerful will fit the nature of the concept you have here.

I agree. I have both spells in my module but no connected effects for the spells. I normally role-play it with my friends. But, I would like this format for solo play. I told my friends we could role play it when we game. The thing I like about this is the penalty. The -2 permanent removal of a constitution point for the use of the Wish Spell and -1 for the Limited Wish spell. Thereby making the use of these spells rare.

Any ideas for some of the wish or limited wish effects?

Does anyone have suggestions for what a Wish or limited Wish should have for drop down menus on casting of the spell?

Duplicating lower level spells. You can use the cast spell function with the cheat parameter so the player can just cast any other spell.

I’m not sure what you mean by “duplicating lower level spells”…like just make it so one can cast them again? I was thinking for Limited Wish…making all spells for all the party from levels 1 to 6 renewed…while a Wish spell would refresh ALL the spells for the entire party and heal them too.

Well, if I remember correctly from 3rd edition at least, one of the uses of wish is simply to cast any arcane spell of 8th level or lower, or any divine spell of 7th level or lower. A decent and reasonable use of Wish or even Limited Wish in that context is being able to cast Raise Dead or something that you could not cast otherwise. I don’t really know your context but IMO that’s the “safest” use of wish/limited wish to have on the table that isn’t roleplayed.

I think with Raise Dead and Resurrection scrolls…that would make the Wish not be so powerful. A Wish or Limited Wish spell is sort of a free-for-all spell…I think one can make anything up (no need to follow rulesets) as any person could think of anything they would like. That being said…we still need to come up with stuff that other spells could not offer in the form of spells or scrolls. Also, the list of choices for each version of the spell should be no longer than maybe 10 choices.

Also, to avoid its use often I recommend the penalties above of -1 on const for a Limited Wish and -2 const for a Wish (permanent) loss.

Well, you seem to have your own ideas and that is all fine and good. I myself am more of a rules as written guy because it alleviates me from having to think too much about balance things. I don’t think D&D is meant to be played with prevalent access to raise scrolls, but that’s just one DM’s opinion. I noticed you seem to be getting a lot of practice with scripting spells, I liked your ventriloquism spell upload. I myself am not so inclined to put time into developing a homebrewed spell I won’t be able to use, though. Just thought I’d help lend some ideas. Good luck!

I loved your input. I want people to give me feedback

Personally I am a AD&D 2 ed guy. I try to make mine as close to that as possible. With a spell like Wish and Limited Wish I feel it is more open for interpretation.

Glad you liked that ventriloquism spell.

I can’t take credit for that though. I’m no scripter. I depend on help from this community for that…but I did think it would be a cool spell. Look at the credits I gave to those who did the scripting. I just gave my input and put the package together.

The wish for an adventure?

Here are my notes to the “original” limited wish, directly from BG2. The repeatable wished depend on wisdom, you’ll get one or the other option.

Well, most of the wishes can be implemented in NWN, but require a lot of scripting. How will you do that?

Some good stuff in there for ideas. Although a wish to stop time…as a wizard that can cast time stop 9th level spell…why not just memorize the time stop spell?

Others like gain more experience is a cool one.

Going to look over these and use some thanks!!

Stil working out the details on how to do this

Some good stuff in there for ideas

I hope so. Since it’s the original spell of Baldurs Gate 2 (which is available as scroll btw.)

Although a wish to stop time…as a wizard that can cast time stop 9th level spell…why not just memorize the time stop spell?

Think again. It requires 14 Wis or the option will not appear. Which wizard or sorcerer has 14 Wis??? Take in consideration, that high level clerics can cast it too, they will have a proper wisdom score but not the ability to stop the time. And rogues may use the scroll. The same for Wail of the banshee.

All good points, but I was thinking of this spell being unique to the Wizard casting it.

I still think the penalties of losing 2 Constitution points (permanently) for casting a wish or 1 point loss for Limited Wish would be a great idea as it really taxes (ages) the wizard - uses up the life force of the wizard. No wizard would want to use it too often because of those penalties.

As for Rogues using the scroll of wish or anyone else…I would make the scroll only useable by Wizard. Of course one could make wish rings or genie in a lamp to create wishes for others using these spells.

Never ever cripple a PC. NEVER. A penalty might be a loss of XP (such as respawn), or a payment to the genie in gold, but nothing else. A drain of life force would be good too (such as the drain of an intelligent weapon), if it can be healed by resting or potions. All those wishes aren’t that great.

Btw: Forget the damn wizards, clerics rock! And Druids aren’t too bad at all

Btw: Forget the damn wizards, clerics rock! And Druids aren’t too bad at all

LOL…man I am a wizard lover!!!..pfft on clerics and tree huggers!!!..lol…although I have a friend who loves Druids.