hello all! after rediscovering nwn with the ee i have become a huge fan of the game and most importantly, its awesome community! In an effort to show off some of the game i began LPing some modules. Unfortunately i had to make a new YT channel (my old old channel Fluents World had 2k+ subscribers) so i don’t have great viewership yet but I’m excited to show off a bunch of modules.

Currently I’m playing Tortured Hearts 1 on android. if you’d like to watch along i encourage anyone crazy enough to catch up with the 50 episodes and join me! i upload two or three episodes per day so I’m very active.

episode 1 can be found here -

note that the audio improves a few episodes in.

all the best, fluent

hi again! my friend Christian here also is playing a module for PC, Darkness Over Daggerford. here is episode 12 but u can easily go back to the start of the series if u choose.

tortured hearts &
beneath the spine

and am currently working on

feel free to join me if you’d like to check out these modules. I’m game god fluent on YouTube. cheers!

and am now working on

toee final &
against the cult of the reptile god

If any module makers are reading this, I would strongly recommend getting in touch with fluent and asking him if he’d like to playthrough your module! He has just finished playing my ‘against the cult of the reptile god’ and while I had plenty of reviews over the years, actually watching someone playing your adventure and hearing their thought processes is an immensely valuable insight, and it’s given me plenty of things I now want to improve or implement. Aside from that, it’s also hugely rewarding to actually watch someone enjoy the fruit of your labours - and he’s a great guy, and a patient and dedicated player. So, get in touch with him if that appeals, and subscriptions to his channel are welcome I’m sure - and he’s certainly doing a great job of promoting NWN!

So I’ve finished Against The Cult Of The Reptile God and my 2 active LPs are currently:

ToEE Final &
The Triangles Of Fate

come join me if you’re feeling too lazy to game or what to interact etc.!

so my next adventure is going to be the Prophet series, starting with the prologue. feel free to join me!

actually watching someone playing your adventure and hearing their thought processes is an immensely valuable insight, and it’s given me plenty of things I now want to improve or implement.

That’s what I’m afraid of!

Good luck with the best story in a video game, period. I hate to say it, but I urge everyone who hasn’t played that series NOT to watch your LP. This narrative absolutely depends on the lack of spoilers. Do yourself a favour and play it first. Sorry, fluent.

Thanks for the good luck! I agree, if anyone wants to experience the story first for themselves, play the game! If u want to experience it with me, watch my YouTube.

Much love to yall either way!

Here’s the first ep of the prologue, much more to come. 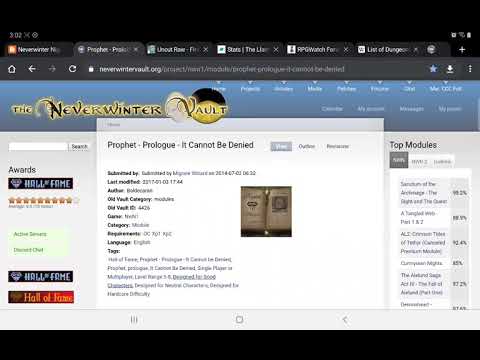 update! the prologue is complete and I’ve started Prophet, Ch. 1 - By The Will Of Kings & Mortals. it’s wickeddd good so far, lots of love and attention to detail in this one! tough encounters, too. see u on YouTube!

update! i have finished chapter 1 of prophet and am close to finishing chapter 2. to celebrate I’ve started the uber excellent Revenant module! u can find all these playthroughs and more at my YouTube channel. cheers!

i am currently playing four great modules at once! playing…

having a lot of fun, so if anyone wants to relax and follow along, feel free! cheers and much love to all of u. nwn is the greatest of all time because of its awesome community. cheers!

starting a new series called FRUA Playthroughs, playing frua modules, as my first one up is The Lost Swords by Ken Hill. based on a book. pretty interesting so far so if u would like to watch me play it’s over on youtube. cheers!